Allison Holker is an Emmy-nominated dancer and is one of the choreographers in the DWTS. She is teaching dance since she was 14. Allison is married and has two kids. 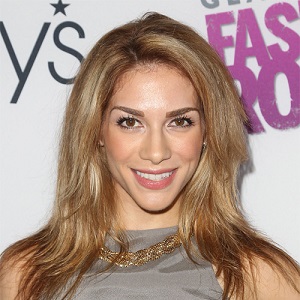 Before all, you need to know who you are, what you believe in, and what you stand for. Be how you want to be received.

Before all, you need to know who you are, what you believe in, and what you stand for. Be how you want to be received.

Dance keeps me fit! It's been a huge benefit in my life and it will forever be a part of me.

Allison Holker is a married man since 2013. She is married to the famous American dancer and actor, Stephen Boss. After a few years of their affair, the couple got married on 10 December 2013. Their marriage ceremony was held in Paso Robles, California.

The couple has two children: their son Maddox Laurel born on March 27, 2017, and their second baby is a daughter Zaia Boss born in November 2019.

The couple met in the year 2006 in the reality show, So You Think You Can Dance. They were competitors then.

Before her marriage to Boss, Allison was in a relationship with her boyfriend. She has a daughter named Weslie Fowler from her previous relationship. The name of her ex-boyfriend is unknown.

Who is Allison Holker?

Allison Holker is an American dancer. She is known for her appearances in the television dance competition So You Think You Can Dance, where she was a contestant in season 2 and an all-star in seasons 7 through 11.

Holker later appeared as a So You Think You Can Dance all-star. She also appears on the VH1 drama Hit the Floor.

Allison Holker was born on 6 February 1988, in Minnesota, USA. There is no information about her parents and siblings.

She grew up in Orem, Utah, and graduated from Timpanogos High School in June 2006. Holker began her dance training at the age of nine when she enrolled as a student at The Dance Club in Orem.

She performed in the opening & closing ceremonies of the 2002 Winter Olympics. Her nationality is American and she is of German and Asian ethnicity.

She has won numerous dance titles including her first National competition in Co DANCE in 2004 and as the National Senior Outstanding Dancer at the New York City Dance Alliance in 2005.

She also appears on the VH1 drama Hit the Floor. She then competed in the 19th season of Dancing with the Stars.

Holker partnered with Mean Girls actor Jonathan Bennett on the show. The couple made it to the finals but lost the final.

In 2103, she was nominated for a Primetime Emmy Award for Outstanding Choreography.

She has a net worth of $2 million.