She recently filed for divorce from her wife Nicki Clyne. Clyne is also an actress and was together with Mack in NXIVM. But it was later revealed that their marriage was only a sham and was used as a way to get Clyne around US immigration laws. Many members of NXIVM also reported that Allison was a sexual partner of cult leader Keith for quite a while.

Before Clyne, Mack dated and even got engaged with fellow Smallville actor Sam Witter. They got engaged in 2013 but they broke up a year later before getting married.

And prior to this, Allison was in a long-term relationship with Canadian actor Chad Krowchuk. They dated through much of the 2000s but it’s unclear when they broke up. 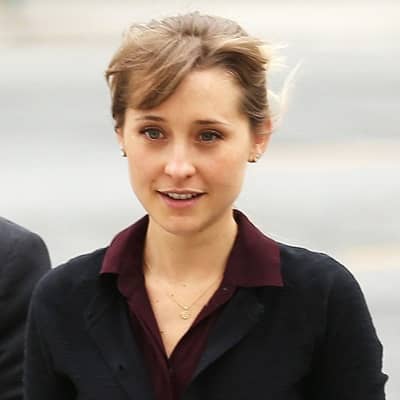 Who is Allison Mack?

Allison Mack is a popular American actress. She is best known for her portrayal of Chloe Sullivan in the superhero series Smallville.

More recently she has fallen from grace as she was arrested and sent to prison after she pleaded on racketeering charges. She was one of the top members of the sex cult NXIVM and has been sentenced to 3 years in prison as of 2021.

Allison Christin Mack was born on the 29th of July, 1982 in Preetz, Schleswig-Holstein, West Germany. As of now, her age is 39. Her nationality is American but she hasn’t shared her ethnicity as of now.

Mack was born to her parents Jonathan Mack and Mindy Mack. Her father was an opera singer and her mother worked as a schoolteacher and bookkeeper.

She was born and lived in Germany for two years as her father was performing there at the time. But soon enough, they moved back to California where Allison grew up with her sisters Shannon and Robyn.

Allison attended and graduated from the Los Alamitos High School. Even before high school, she studied at the Young Actors Space in LA. Then after high school, she pursued further education through Orange County School of the Arts and later through UC Berkeley.

Mack initially worked in a number of ads and print commercials. But soon enough she started her career through the series 7th Heaven in her teenage years. And after a number of other roles, she landed her breakout role in the TV series Smallville. Mack portrayed Chloe Sullivan on the series and was a part of the series for nearly a decade. After this, she also appeared on the sitcom Wilfred as a recurring character. Aside from these popular roles, Allison also appeared in a number of other TV series and films such as American Odyssey, Marilyn, and The Nightmare Room to name a few.

Allison has won a number of major awards and has been nominated for even more throughout her career. Her wins include a 2006 and 2007 Teen Choice Award and a 2008 SyFy Genre Award for her role in Smallville.

Despite her successful career as an actress, Mack has greatly fallen from grace after her recent arrest and subsequent sentencing. All of this came to be after she joined the sex cult NXIVM. The cult was branded as a practical self-help group led by their leader Keith Raniere. It seemed quite harmless at first and Mack joined them in 2006. As time went by, she became a top member of the cult and started participating in their darker and illegal activities. Her influence as an actress also made her the main recruiter for the organization.

Her main activities in the group were to recruit women into DOS or The Vow, which was a subgroup of NXIVM that presented itself as a women’s self-help group. And while this seemed like the case, women in DOS were being blackmailed, sexually exploited, and even branded with the initials of Mack and Keith on their pelvic region. And through these means, Mack was enslaving women and forcing them to have sexual relations with their leader Keith.

But fortunately, the FBI was alerted about the activities of the cult by former members and those affected and took action. As such Mack was arrested on the 20th of April, 2018 on charges of sex trafficking, sex trafficking conspiracy, and forced labor conspiracy. Following an extensive trial, Mack entered plea negotiations and along with information on NXIVM, she pleaded guilty to racketeering charges. Due to this, she was sentenced to three years in federal prison as of June 30, 2021. On the other hand, their leader Keith has been sentenced to 120 years in prison as of October 2020.

Mack currently has a net worth of roughly 1 million USD as of now. This figure has dropped substantially following her arrest and subsequent sentencing.

Allison stands at a height of 5 feet 5 inches and her weight is roughly 50 kilograms. She is quite slim and has a petite figure. Her hair is blonde and her eyes are green in color.

Get to know more about the lives of Nicki Clyne and Keith Raniere as well.