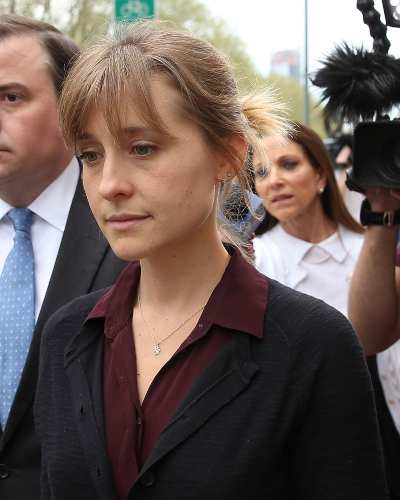 Allison Mack outside the court for her role in NXIVM Cult (Source: Oprah Daily)

The American actress, Allison Mack, got 3 years of a sentence of three years for her role in the NXIVM cult. Authorities arrested her on the charges of manipulating women into becoming “sexual slaves” for the group’s spiritual leader. Previously, she also faced charges for taking responsibility to help Nxivm leader, Keith Ranier, to create a secret society.

Mack, who is famous for her role as a young superman’s friend in Small ville, is facing 3-years prison sentence. As per the reports, Mack was taking the responsibilities for helping Ranierto create a secret society. The secret society was a bunch of  brainwashed women with the brand of his intials. During her sentencing in Brooklyn federal court, The actress said:

“I made choices I will forever regret,”

She also told the judge she was filled with “remorse and guilt”. In a letter, she wrote in a letter while devoting herself to the self-improvement guru, she called it “was the biggest mistake and greatest regret of my life”. Furthermore, she also mentioned:

“I am sorry to those of you that I brought into Nxivm. I am sorry I ever exposed you to the nefarious and emotionally abusive schemes of a twisted man.”

The actress also reiterated her apologies to the victims in court on Wednesday.

Under advisory sentencing guidelines, the actress will face between 14 and 17 and a half years behind bars. However, her defense teams argued  in court papers that probation or a sentence to home confinement is more appropriate. Meanwhile, prosecutors agreed  that any prison term should be below the guidelines range. The prosecutors mentioned she became the “master” for “slaves” she ordered “to perform labor.

This also included nude photographs and engaging on sex acts in some cases. As per the authorities, had fled to Mexico with the actress. But they arrested him and sent to the United States in March 2018. The authorities later arrested the actress just a few days after his arrest. Later on Mack revealed to prosecutors about how Raniere encouraged “the use of demeaning and derogatory language, including racial slurs. Moreover, she also provided the recorded conversation she had with Raniere. Raniere got the sentence of 120 years in prison for his conviction on sex-trafficking charges.