Stokke is married to American professional golfer Rickie Fowler. They together walked on the aisle on 5th October 2019. Previously, they have engaged in June 2018. The couple has been dating and seeing each other since 2017.

After 4 years of their togetherness, the pair has their first daughter, Maya Fowler on November 18, 2021. They seem to feel blessed and are now focusing on nurturing their baby girl and enjoying parenthood. 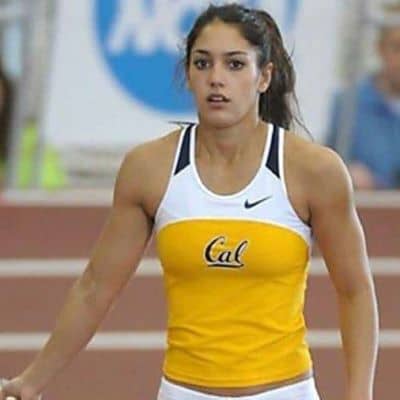 Who is Allison Stokke?

Allison Stokke is an American fitness model, track and field athlete who got limelight for her special pole vaulting skills. Previously, at the age of 17, she broke a number of American records for high school pole vaulting and become an internet sensation.

She was born on March 22, 1989, in Newport Beach, California to her father Allan Stokke and mother Cindy Stokke. She is Aries zodiac as per western astrology. Her ethnicity is Caucasian.

She belongs to a sports-loving and sports enthusiast family. Her older brother David was a national-level youth gymnast but he could not make an amazing career out of it.

To begin with her educational background, she first joined Newport Harbor High School and did her early education. Later, she graduated from the University of California, Berkeley. She was in the college team California Golden Bears in athletics.

Stokke stands 5 feet and 7 inches tall. She has a fair body complexion that suits her black hair and hazel eyes. Recently, she has given birth to a baby 3 months back thus her weight is currently fluctuating and no such details are available.

In contrast, she is an athlete so will tie up her fitness soon after her post-maternity phase gives her time. According to some sources, her shoe size is 9.5(US).

Talking about her athletic background, she played pole vaulting since her high school days as a teen. Since 2017, Stokke hasn’t contended professionally in pole vaulting, Now she’s become a triumphant sports model and gone on to do sportswear modeling and performance marketing.

Being a professional athlete was no longer her choice now but it’s her athletic career that brought her fame. Her dedication, devotion, and her fitness journey gave her another platform as people see her as a role model and accept her as their brand ambassador.

To date, she has won 2 NCAA Division I Championships and All-American NCAA Indoor Championships. To add up, she succeeded All-Academic Honors as well.

She has a net worth of $ 500,000. The eminent athlete has earned good wealth from her career as a pole vaulter and many other endeavors.