Actress-Comedian Allison Williams is married to a businessman.

Allison Williams is a married woman. She has been married to Ricky Van Veen in Saratoga, Wyoming since September 19, 2015. Ricky is a famous businessman and co-founder of the famous website CollegeHumor.Com.

The duo began dating in 2011 and got engaged in February 2014. They met for the first time while she was working in CollgeHumor’s series ‘Jake and Amir’ in which she portrayed the role of Cheryl. 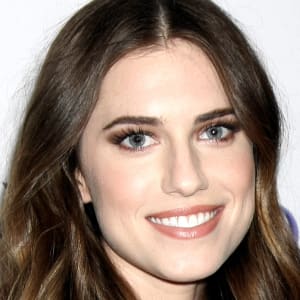 “It's very weird waking around a corner and being nose to nose with myself on the side of a bus. And Times Square - that's the craziest one.”

Who is Allison Williams?

Allison Williams is an American actress, singer, and comedian. She is best known for her role as Marine Michales on the HBO series ‘Girls’.

She is also well recognized for her critically acclaimed performance in the horror film ‘Get Out’ in 2017.

Allison’s father is a former NBC Nightly News anchor and managing editor and her mother is a TV producer. She has got a brother named Doug and he is three years junior to her.

She holds American citizenship and her ethnicity is a mix of Irish, Swedish, German, Scottish, and distant French.

She joined New Canaan Country School and Greenwich Academy and later attended Yale University from which she graduated in English in 2010.

During her university period, she was a member of the improv comedy Toupe Just Add Water for four years.

Allison Williams performed a mash-up of ‘Nature Boy’ that set RJD2’s ‘A Beautiful Mine’ in 2010. The song was included in the famous television series ‘Mad Men’. The song got a positive response from all over the world. After she became recognized on the internet, she was suggested to perform in the HBO comedy-drama series ‘Girls’.

She also wrote a series of Funny or Die sketches. The sketches introduced Kate Middleton with Oliver Jackson Cohen as Prince William who was a Duke of Cambridge. Then, she made her appearance in the episode ‘The Guest Bong’ if ‘The League’ in which she performed the role of Danielle. Soon after, she portrayed the character, Cheryl, in the series ‘Jake and Amir’ from 2011 to 2012.

She played the character, Rose Armitage, in the horror film ‘Get Out’ in 2017 directed by Jordan Peele, and cast as a recurring role as Kit Snicket in the Netflix comedy-drama series ‘A Series of Unfortunate Events’ in 2018.

In addition to her acting career, she is also an ambassador for Horizons National. She led a campaign named ’10 Days of Giving’ in the year 2016 in order to raise the funds and awareness of the organization’s educational goals.

She recently shared her views about politics, millennial activism, and women in Hollywood on the Politico podcast ‘Women Rule’.

She has an estimated net worth of around $5 million as of 2022, and she has earned that sum of money from her professional career.

There was a rumor about her death but the report of March 2019 has declared that she is still alive and all the rumors be false.

Allison Williams has a height of 5 ft. 5 inches and she weighs 54 kg. Also, Allison has got blue eyes and dark brown hair. Her body measurement is 34-24-34 inches.

To know more about Dave Annable, Nick Zano, and Azura Skye, please click on the link.

Songstress Alexandra Burke has split from her fiance stage manager Josh Ginnelly! Is it the Strictly Curse?