Jess Kato in the TBS comedy series Wrecked and the voice of Giggle McDimples in Toy Story 4.

Ally Maki is in a relationship, she is engaged to her long-time friend, a pop singer named Travis Atreo.

Many of Ally’s fans had speculated that the duo was in a relationship after the actress made the singer her Valentine in 2014.

Similarly, the couple made a trip to Tokyo, Japan on Valentine’s day 2019. 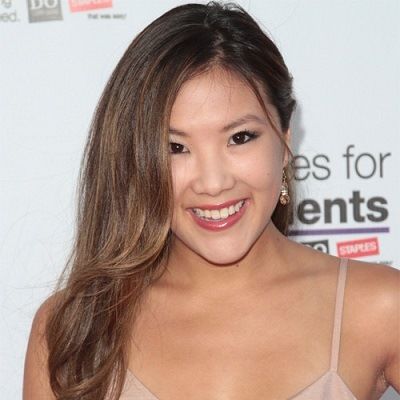 Who is Ally Maki?

Ally Maki is a multi-talented, hardworking American actress, her role as Jess Kato in the TBS comedy series Wrecked and the voice of Giggle McDimples in Toy Story 4.

She appeared in series like The Big Bang Theory, Shake It Up, That’s So Raven, and Cloak & Dagger.

Ally Maki was born Ally Matsumura, on December 29, 1986, in Seattle, Washington, the United States. Meanwhile, she was predominantly raised in a white neighborhood by her parents. Ally holds Japanese-American citizenship, and her ethnicity is Asian.

Ally’s mother enrolled her in acting at the age of eight, with the hopes that the stage would somehow shed her shyness. Soon, she found her knack for Comedy, the same skill she developed from battling for attention with her brothers.

Maki appeared in the television film iCarly: iGo to Japan 2008, as well as her many cameo appearances in films and television series, such as Step Up 3D 2010.

She played the final role of Alice in the 2012 drama film The Perks of Being a Wallflower, which eventually went to Erin Wilhelmi.

She has starred as Jess Kato in the TBS comedy series Wrecked between 2016 and 2018. Ally starred in Marvel’s Cloak and Dagger on Freeform in 2018.

She earns around an average salary of $50,529 per year.  Maki has been featured in the Adidas 60th Anniversary global campaign.

In the years 2007, she was featured in the national promotional campaign for T-Mobile, which included TV commercials, print adverts, and internet adverts.

She has also appeared in a TV advert for Juicy Fruit.

She has also used her social media activity to promote several products and brands such as Levi’s, Paul Smith Design, and Dior.

There was a rumor that Ally is dating actor and singer, Colton Haynes. However, they have always maintained that they are just very close friends and have never dated.

But, she inadvertently flames the dating rumors by posting pictures of them together on her official social media accounts. She also doesn’t shy away from calling him ‘bae‘ in the captions.

Ally has black hair and dark brown eyes, she has a height of 5 feet 1 inch and she weighs is 50Kg.