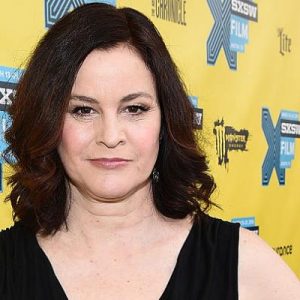 “I have the desire to work as an actress, but I have no ambition to be a star.”

Ally Sheedy married actor David Lansbury on April 12, 1992. He is the nephew of actress Angela Lansbury and son of Edgar Lansbury, the original producer of Godspell.

They have welcomed a child, who was born a female in 1994, but now identifies as a man. The child is named Beckett. Due to this reason, Ally is a strong supporter of transgender advocacy. But, the couple announced the divorce in May 2008.

Previously, she dated Bon Jovi guitarist, Richie Sambora in the 1980s for less than a year.

Who is Ally Sheedy?

Ally Sheedy is an American actress and author. She is famous for her role in the films ‘The Breakfast Club’ in 1985 and ‘St. Elmo’s Fire’ in 1985.

She was awarded the Independent Spirit Award for Best Female Lead for her performance in Lisa Cholodenko’s ‘High Art’ in 1998.

Ally was born on June 13, 1962, in New York, USA. Her birth name is Alexandra Elizabeth Sheedy and she is currently 58 years old. She has got two siblings, Patrick(brother) and Meghan(sister). Her father’s name is John J. Sheedy and her mother’s name is Charlotte.

Ally’s mother is a writer and press agent who was involved in women’s and civil rights movements, and her father is a Manhattan advertising executive.

Her father belongs to an Irish Catholic background and her mother belongs to Jewish. Her parents separated in 1971. She holds American citizenship and her ethnicity is a mix of Irish, German, and Ashkenazi Jewish.

She wrote a book named ‘She Was Nice to Mice’ which was published by McGraw-Hill Education and the book became a best seller.

She graduated from Columbia Grammar & Preparatory School in New York City in 1980. At the age of six, she started dancing with the American Ballet Theatre and planned to make it a full-time career. But, she chose acting later.

As a teenager, Ally Sheedy started in local stage productions and appeared in several television films in 1981. She appeared in the three episodes of the television series ‘Hill Street Blues’ and debuted her feature film ‘Bad Boys’ in 1983, where she played Penn’s humiliated girlfriend.

She became more popular after her role in films like ‘War Games’, ‘The Breakfast Club’, ‘St. Elmo’s Fire’, ‘Short Circuit’, and ‘Maid to Order’. She played in the independent film ‘High Art’ in 1998 alongside Radha Mitchell.

Ally has made her appearance in the episode ‘Leapin’ Lizards of ‘C.S.I.’ and was introduced as the character of Sarah in the show ‘Kyle XY’ on March 3, 2008. She portrayed the role of Mr. Yang on the USA Network television show ‘Psych’ and reprised that role in the fourth, fifth, and seventh season finales.

She won Independent Spirit Award for Best Female Lead for ‘High Art’ in 1999, the National Society of Film Critics for Best Actress for ‘high Art’ in 1999, MTV Movie Awards for Silver Bucket of Excellence Award for ‘The Breakfast Club’ in 2005, and nominated several times.

She has collected an estimated net worth of around $6 million from her professional career. But her salary is not disclosed.

During her relationship with Richie Sambora, she stated that the relationship led her to abuse drugs, and admitted to Hazelden Foundation. She was treated for a sleeping pill addiction in the 1990s.

Ally Sheedy has a height of 5 ft. 5 inches and she weighs 55 kg. She has got dark brown hair and dark brown eyes. Her body measurement is 33-24-35 inches.

To know more about Shauna Sexton, Liana Liberato, and Lil Fizz, please click on the link.