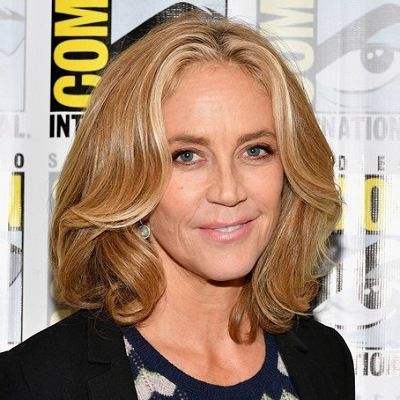 I loved my soap days. I really loved them. A Martinez and Marcy Walker taught me how to act, basically. All those people pulled together and helped get me started. Like, showed me how to hit my mark, made me do this, made me do that. That was my first long-running professional gig. And it was like, they were just -- great, great with me.

I'm probably going to go more the feature film route for a while, just so I have more time on my hands. If I did go back to television, I'd do a comedy, a half-hour. Or I'd go back on an hour-long if it was an ensemble if I had a smaller role if I could work fewer days. Being the main character and carrying an hour and being pregnant and having a new baby and a new marriage was like -- I'm tired. I've got to be honest with you, I'm really tired.

She and her husband live in Santa Monica with their children. The family also owns three dogs.

Who is Ally Walker?

Ally Walker is a famous American actress. Ally made her television debut in the NBC daytime soap opera, Santa Barbara 1988.

She appeared in the Sci-Fi drama TV series ‘Colony’ as Helena which airs on USA Network.

Her role as Doctor Samantha Waters in the TV series ‘Profiler’ on NBC was a critically acclaimed. Walker also had the leading role in the short-lived Lifetime police drama series The Protector in 2011.

Ally Walker was born Allene Damian Walker on August 25, 1961, in Tullahoma, Tennessee, the United States. She is a  Virgo.

Her father is James Joseph Walker, who worked at ‘The Los Alamos Scientific Laboratory Walker’ and mother,  Louhannah was an attorney.

Walker wanted to be a scientist and obtained a degree in biochemistry from the ‘University of California, Santa Cruz.’

She then started preparing herself for medical school at the ‘University of California, Los Angeles’.

She developed a keen interest in acting when she attended the ‘Richmond College of Arts’ in London, England.

Ally was discovered in L.A. restaurant and cast for her first project.

She starred as ‘State Profiler Audrey Macleah’ in the 1994 American thriller film ‘When the Bough Breaks.’ Walker starred in many other films, such as:

Walker  guest-featured in several TV series, such as ‘Tales from the Crypt,’ ‘Boston Legal,’ ‘Matlock,’ and ‘Law & Order.’

Walker performed in many ‘Off-Broadway’ productions in New York. Her stage credits include Alan Ball’s play ‘Five Women Wearing the Same Dress’ and the Nora Ephron and Delia Ephron play ‘Love, Loss and What I Wore.’

Walker supports organizations such as the ‘CYFC Children Youth and Family Collaborative’ and the ‘Environmental Defense Fund.’ She directed and produced the 2005 documentary ‘For Norman… Wherever You Are.’