Alvaro Rico is a well-recognized Spanish actor and TV star.

Talking about his love life, Alvaro Rico is presently single and he is not dating anyone at the moment. He might be concentrated on shaping his career at the moment after his breakup with Elite co-star.

Previously, he was dating Ester Exposito. Together, the duo has worked in the Elite series. She was the co-star of Rico and they used to express a special bonding with each other on and off the screen.

The former couple was spotted in Rome and also posted photos from Plaza de Oriente in Madrid. Alvaro had shared photos with her on his Instagram. However, their photos were not seen on social media and fans started doubting about their separation.

In the end, the couple got separated in October 2019. 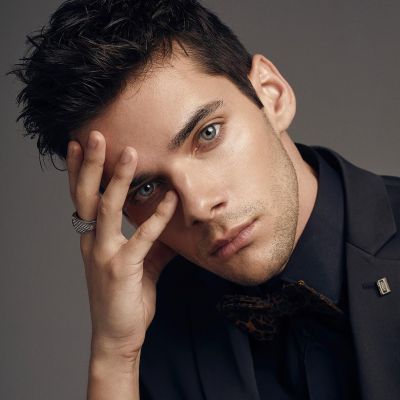 Who is Alvaro Rico?

Alvaro Rico is a well-recognized Spanish actor and TV star. Rico is widely famed for his role on Lacaza. Monteperdido(2019), Velvet Coleccion(2017), and Tales of the Lockdown(2020).

Moreover, he is best renowned for portraying the character of Polo in Netflix’s original series, Elite.

Alvaro Rico was born on 13 August 1996. At present, his age is 24 years old. Likewise, his birthplace is La Puebla de Montalban, Toledo, Spain.

Not much known about his father and mother’s details, Alvaro has been secretive towards his family details. Moreover, he has not revealed his sibling’s details in the public till now.

Talking about his nationality, Rico holds a Spanish identity whereas his ethnicity is Hispanic.

Regarding education, the actor has not revealed his academic details to the public. He might have completed his graduation from the university of the town.

Professionally, Alvaro started his career working as an actor in a theater adaptation of La Celestina in 2011. Alvaro then made his television debut in an episode of Medical Center in 2017. Earlier, the actor has performed the role of Nicolas in Velvet Coleccion.

In late 2017, Rico was selected as one of the protagonists of the second original Spanish Netflix series named, Elite. Since then, Alvaro works as an actor in Elite. It is a Spanish series which was produced by Carlos Montero and Dario Madrona. Rico is the casting member along with co-star Danna Paola, Ester Exposito, and Mina El Hammani.

Talking about his role, Rico has portrayed the role of Polo who is a bisexual young man. Polo performs in a love trio with Carla(Exposito) and Christian(Herran).

In 2021, he interviewed for Vanity Teen Magazine about the effect of the series on society and his future performances.

A famous Spanish actor, Rico has earned a handsome amount of money from his profession. He has been actively working in his profession from 2017 till the present.

It is reported that Alvaro Rico has an estimated net worth of $9 million.

Alvaro has never been part of any controversial matter or rumors till now. The actor has been preoccupied with his professional and private life.

It seems that Rico prefers enjoying his personal life and does not want to merge it with his professional life.

24 years old star, Alvaro Rico has dashing looks, hot body shapes, an athletic body, and an admirable personality. He stands at a height of 5 feet 10 inches. Also, he has a balanced bodyweight of 70 kg.

Furthermore, Rico has blue eyes whereas his hair is light brown. His shoe size is 10.5(US).

Nevertheless, the prominent actor has never mentioned other physical details in the public yet.

Regarding his social media presence, Alvaro Rico is an active personality on social media. Alvaro has more than 6.4 million followers on his official Instagram account @alvaroricocladera.

He is also active on Twitter with around 71.5k followers.

Moreover, Rico is also available on Facebook with nearly 559k fans and supporters.