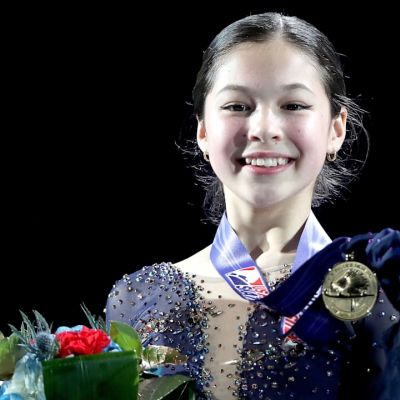 What is the relationship of Alysa Liu?

Currently, she is single and busy with her professional and personal life.

Alysa Liu is a young athlete who has earned many achievements and medals.

Who is Alysa Liu?

Alysa Liu is the name of a Famous American Figure Skater, who is a participant in the lady’s singles discipline.

Alysa Liu was born to her father, Arthur Liu, and mother,  Yan Qingxin on 8 August 2005, in Clovis, California, the United States.

Currently, she is 16 years old and belongs of American nationality. She is of mixed ethnicity and her birth zodiac sign is Leo.

Liu’s father is an entrepreneur who relocated to the U.S.from a small mountain village in Sichuan, China after completing his degrees from a university in China.

He took his educational life furthermore and receive M.B.A. and J.D. degrees in California. Liu is the elder child among her four siblings who were developed via an unknown egg donor and a surrogate mother.

Selina and Julia are her sisters whereas Jaylin and Justin are her brothers. Later, her parents separated.

Liu went to Chinese school for three years, then studied at the Oakland School for the Arts. It used to emphasize figure skating too.

Liu couldn’t attend school while traveling to competitions,  her father homeschooled her during the practice break.

She studied through the same online agenda that others have used, and Liu is now ready to graduate during the 2021-22 school year.

From the age of five, she started to skate. Her father himself was a big fan of Michelle Kwan and he admitted her to the Oakland Ice Center.

Laura Lipetsky, who is a one-time figure skater was her coach. She ranked seventh place in her foremost skating competition at the Central Pacific Regionals in 2015.

She won the intermediate gold medal and was the youngest female skater to win the medal in the 2006 U.S. Championships.

At the 2017 Asian Open Trophy, she won the silver medal.

Similarly, In the 2008 U.S. Championships held in San Jose, California she became the winner by scoring 184.16 points in total although she was not fine with her health.

Due to her young age, she was not able to become part of the 2018 World Junior Championships.

Liu became the winner of the 2018 Asian Open Trophy held in Bangkok, Thailand. She was the first youngest skater to do ratified one and two triple Axel, and a quadruple jump.

Similarly, she won the Cranberry Cup, by scoring 205.74 which was a Senior B Competition.

Liu made her senior debut at the ISU Challenger Series and finished it with the victory by scoring 32 points and landing and triple Axel in 2021.

Liu was selected for the 2021 CS Nebelhorn Trophy. She was ranked first overall in the 2021-2022 ISU Challenger Series-winning against, Georgis’s Anastasia Gubanova almost by 40 points.

She came fourth in the Grand Prix 2021 Skate Canada International and 2021 NHK Trophy.

Likewise, she stood third at the 2022 U.S. Championships in Nashville finishing at 71.42 points.

However, she was not able to continue the championship due to her COVID-19  positive health issues. She became the youngest athlete on the American Olympic team.

Being a successful athlete, the net worth of Alysa Liu is estimated to be around 1 to 5 million USD.

No information about her salary and income is found in the media.

Alysa Liu is a young athlete who is busy focussing on her career and personal life. So, Alysa Liu has stayed out of rumors and controversies to date.

Alysa Liu has a flexible athletic body with 5 feet 0 inches in height and weighs around 45 Kg.

Her body dimensions include her bust, waist, and hip sizes are 24 – 23 – 25 inches respectively.

Likewise, she has beautiful fair skin with pair of black eyes and hair of the same color.