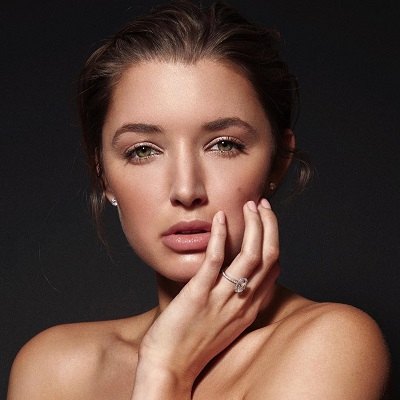 I've always been comfortable with my body. And I've always loved nude modeling. Throughout my career my friends have asked, "Why haven't you done Playboy?". Now here I am!

I love the freedom and independence of driving. Actually the truth is I'm a speed demon.

I don't try to be, but people say I'm a funny girl. I love to banter, so don't be too sensitive. I hate close-minded arrogant men who don't know how to respect a girl.

Alyssa Arce is currently in a relationship with a man whose name is not disclosed.

She shared Amo’s picture through her Facebook post on Valentine’s week where they shared a beautiful moment with each other on the sea beach. Also, she mentioned in the caption that she loves him wildly.

Previously, rumors were there that she was in a relationship with Justin Bieber.

Who is Alyssa Arce?

American Alyssa Arce is a model. She is renowned for posing for the Playboy Magazine.

Alyssa Arce was born on the 27th of February 1992 in North Myrtle Beach, South Carolina. Her father is of Honduran ethnicity whereas her mother is of Caucasian ethnicity.

Till the date, she has not disclosed the names of her parents. However, she shared the picture of her father on his birthday, i.e 26th of August. Similarly, she has shared a picture of her mother during her birthday.

She has a brother, Gabriel Arce. He is a Hype man by profession.

Talking about education, in 2010, she graduated from North Myrtle Beach High School in Little River.

During High School, she used to play soccer. However, she admits that she is not very good at sports. During the days, she was also engaged in the cheerleading too.

Alyssa Arce always had a keen interest in the model works since her childhood. After graduating from High School, she signed with Wilhelmina LA. However, she first came into notice when she started posing for the Playboy Magazine.

In July 2013, she was even named as the playmate of the months. Moving forwards, she posed for the Ford Modeling Agent. After that, her popularity even boosted when she modeled for ‘LUI’ magazine photographed by Terry Richardson.

Through her career as a model, she has managed to make a net worth of $1 million. As a model, her earnings are in the range of $21k to $201k.

Besides that, she also made through brand endorsements too that include brands like Rebels Refinery, Galvan London, and Proclamation Jewelry.

As of now, she has managed to be far from any sort of controversy that created a buzz in the media.

However, back in 2014, there were rumors that she is dating the baby singer, Justin Bieber. The rumors were started when she was spending some quality time with Bieber on the yacht at Miami’s beach. At the time, she was spotted with a skimpy two-piece bikini.

Alyssa Arce is a hazel-eyed brunette. Her height is 5 feet 8 inches and weighs around 55kg. She wears a shoe of size 7.5 (US)