Updated On November 23, 2022 | Published By: Claude Payton
Share this
In Relation 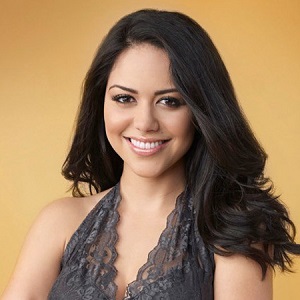 Oh I love it! Hmm, some of the scenes with Michael, such as when we were walking through the market place and it’s right before he gets kidnapped. We have playful banter with one another and it’s this romantic little walk but it still feels like a very lived-in couple – they have inside jokes with one another – and finding that with Michael was really fun.

Does Alyssa Diaz have kids?

Alyssa Diaz is engaged to her boyfriend Gustavo Galindo in December 2019. The couple got engaged in Hawaii. Her fiance Gustavo is a Grammy Nominated Singer-Songwriter.

They have two children, an elder daughter and a younger one a son born on December 28, 2020.

The couple often shares photos of them spending time together via their Instagram handle. But, neither of them has confirmed the plans.

Hopefully, the couple will plan their wedding details and get married soon.

Who is Alyssa Diaz?

Alyssa Diaz is an American actress famous for her roles as Jasmine on the ABC Family series ‘The Nine Lives of Chloe King’.

Diaz also played Celia Ortega on the CBS daytime soap opera ‘As the World Turns’, Gloria Cruz in Army Wives, and Officer Angela Lopez on the ABC series ‘The Rookie’.

She was born in Northridge, Los Angeles, California, USA, on September 7, 1985. Her birth name is Alyssa Elaine Diaz and she is currently 37 years old.

She has got a brother named, Michael. She holds American citizenship and her ethnicity is a mix of Colombian and Mexican.

Her father, mother, and early childhood detail is under examination.

She attended Bishop Alemany High School and graduated from there.

She made her guest television appearance in television shows like ‘Southland’, ‘SCI: NY’, and ‘Lie to Me’ and starred in the television films ‘Ben 10: Alien Swarm’, and ‘The Jensen Project’ and in the film ‘How the Garcia Girls Spent Their Summer.

Between, She played the role of jasmine on the ABC Family Series The Nine Lives of Chole King’ in 2011 and played the recurring role of Gloria Cruz on ‘Army Wives in 2012.

In March 2013, she was upgraded to series regular for the seventh season and she also appeared in ‘The Vampire Diaries.

She portrayed the role of Dariela in the CBS drama ‘Zoo’ for its second season in March 2016.

She is currently playing Mika Camarena in the Netflix series Narcos: Mexico and Officer Angela Lopez in the ABC drama ‘The Rookie’.

It is estimated that she has a net worth of $1 million (2022). Her main source of income is her professional career. While her salary is unknown.

Alyssa Diaz likes to keep her lips tight and she has not been involved in any rumors or controversies.

Additionally, She says that she likes a glass of wine, yoga or meditation, or pounding on the African djembe drum.

Her body measurement is 30-23-33 inches. Alyssa has got black hair and dark brown eyes.

Meanwhile, she is not actively using her YouTube and TikTok accounts.