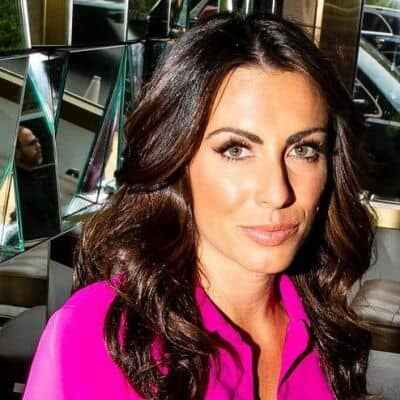 Who is the husband of Alyssa Farah Griffin?

Reflecting on her personal life, Alyssa Farah Griffin is a married woman. She is happily married to her husband, Justin Griffin. He is an MBA student at the Stern School of Business, who is set to graduate in 2022.

In October 2020, they got engaged and later took their relationship ahead with marriage on November 6, 2021. They wedded in Vero Beach, Florida, with a large party over a year and a half later.

How many Children does she have?

As per the sources, she has one child but, she has kept him/her away from the limelight and media. So, name and other details are unknown.

Who is Alyssa Farah Griffin?

Alyssa Farah Griffin is a known American political advisor. In 2020, she served as the White House Director of Strategic Communications and Assistant to the President in the Donald Trump administration.

In 2021, she was appointed as a political commentator for CNN.

Currently, In July 2022 the news that Alyssa Farah Griffin has been reported to be the permanent replacement of Meghan McCain on ‘The View’ is heading the limelight. She is set to start her work as a co-host after the begging of the new seasons in September 2022.

Alyssa, a former assistant to Donald Trump was born on June 15, 1989, in Los Angeles, California, United States. As of 2022, She is 33 years old holding an American nationality. Similarly, she is of mixed ethnicity while her birth star sign is Gemini.

She was born to her father, Joseph Farah, a journalist, and her mother, Judy, a journalist. Her father belongs of Syrian and Lebanese descent while her mother is of Ukrainian ethnic background.

As per her academics, in 2007 she completed her schooling at Bella Vista High School. Late, she graduated from Patrick Henry College with a bachelor’s degree in Journalism and Public Policy.

Similarly, there are not any data about her siblings.

Initially, Griffin started her career by serving as a special Washington correspondent for WorldNetDaily, a far-right conspiracy website.

Then, in 2012, she became the spokesperson for the College Republican National Committee, Mark Meadows during the Presidential election cycle. Following that, under Jim Jordan and Mark Meadow, she served as the Communications Director for the Freedom Caucus in the U.S. House of Representatives.

She was assigned as Special Assistant and Press Secretary under Vice President Mike Pence in September 2017.

On April 7, 2020, she was appointed as the White House Director of Strategic Communications in the White House Office. After her participation, she was considered one of the important members of forming the Trump administration during COVID-19.

On December 3, 2020, she resigned from her position as White House communications director.

Politico reported that Griffin would be joining CNN in December 2021. By January 2022, she was appointed as a “CNN political commentator”.

Currently, In July 2022 the news that Alyssa Farah Griffin has been reported to be the permanent replacement of Meghan McCain on ‘The View’ is heading the limelight. She is set to start her work as a co-host after the begging of the new seasons in September 2022.

According to various sources, the CNN political commentator Alyssa has a net worth of around  $8 million as of 2022. Her salaries and incomes have not been disclosed yet.

Griffin was reported to be scammed by using her name to targets members of Congress in 2019. However, the matter was handled and investigated by the FBI.

Alyssa Farah Griffin is 5 feet and 6 inches tall weighing around 55 Kg. Likely, the lady has a slim body.

Talking about her social media appearance, she is present on it with huge fan followings. Griffin has an Instagram under the username, @alyssafarah having more than 14.4K followers.