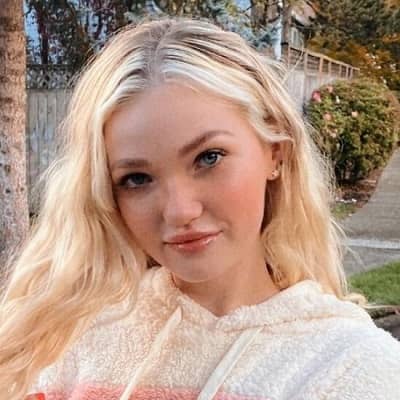 Alyssa Mckay is in a relationship with Brad Mondo.

Alyssa posts various videos and vlogs with Brad on her channel too. Just on Aug 17, 2020, she posted a video with him entitled, “destroying my boyfriend’s hair … “.

Who is Alyssa Mckay?

Alyssa McKay is an American TikTok star who is well known for her lip-sync, and dance videos in her account, alyssamckayyy.

Furthermore, she is also an actress and has appeared as Valerie in the movie Leave No Trace.

Alyssa was born on 11th January 2000 in Milwaukie, Oregon, United States. And she grew up in Portland, US. Her ancestry is of Scottish and Northern Irish origin.

She was adopted and the names of her biological and adoptive parents are not disclosed. She must have finished her high school education. But its details are unknown.

Alyssa has successfully built her career as a TikTok star. She started posting on TikTok in 2018. Her username was previously dreamylyss and was later changed to alyssamckayyy. She posts various lip-synch videos of scenes from popular TV and movies. Similarly, Alysa also posts videos of her singing popular songs on her Youtube and Tiktok.

Alyssa launched her Youtube channel on Jul 9, 2018. She posts various blogs, challenges, and fun activities with her friends on her channel. The first video she posted on her YouTube channel was “my experience in foster care’. It was posted on August 14, 2018. The star also posted a video entitled, “The Truth About Tik Tok” recently in April 2020.

She has amassed a net worth of around $300,000. The star earns around $150 to $300 per song promotions on her account. Besides it, she also earns from her brand’s deals and has worked with Fashion Nova, FujiFilm, Aeropostale earning from $1K to $5K from it.

Moreover, she has a merch on tcsocialclub. Different Hoodies, Clothing, Regular fit, Sweatshirts, T-shirts, and similar stuff are available for sale on its website.

She hasn’t been part of any type of rumors or controversies.

Likely, she has blonde colored hair and grey colored eyes.

Likely, her official TikTok account also holds 6.3M followers with more than 208M likes. Similarly, she has her own YouTube channel with 24K subscribers.

Also, get to know about Maudie Garcia, Donlad Dougher, Ravon M, and Montsofine.