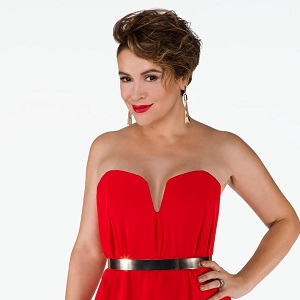 It's nice to be important, but it's important to always be nice

Animals, they are one of the most beautiful gifts we have and, you know, if there are people that have compassion, there are very few people that put their money into animal rescue organizations. And if there is someone that has that passion, animals need all the help they can get.

What is the relationship of Alyssa Milano?

Her first marriage was to singer Cinjun Tate in 1999. However, they couldn’t continue their married life for long and separated in the same year in 1999.

Back in 1986, she started dating actor and singer, Corey Feldman for one year. Moreover, she has also dated Wayne McBean, Jonathan Silverman, and TV personality, Eric Nies.

Back in 2002, this famous actress was also linked up with singer and actor Justin Timberlake and eventually broke up.

A couple of years later, Alyssa went out with baseball player Brad Penny as well as an Italian baseball pitcher, Barry Zito. However, it didn’t work.

Who is Alyssa Milano?

Alyssa Milano rose to prominence after appearing in Who’s the Boss?, followed by Melrose Place and Charmed.

Additionally, she is also an activist who actively takes part in various charitable works.

Who are the parents of Alyssa Milano?

From childhood, she had a keen interest in acting and also began to learn from a very early age.

Moving towards her nationality, she is American and her ethnicity is Italian.

She completed her graduation from Buckley School.

Alyssa began her major acting career with the 1984 TV series Who’s the Boss? for which she also won several awards. In the series, she played the role of Tony Danza’s daughter.

A couple of years later, she appeared in a couple of television series such as Crash Course, Living Dolls, and Casualties of Love: The Long Island Lolita Story.

In 1997, she stole the limelight from the movie called Hugo Pool. In addition, this American actress also appeared in several movies which include New Year’s Eve, Hall Pass, My Girlfriend’s Boyfriend, The Blue Hour, and a few more.

Back in 1988, she starred as Shelley Sheridan in the famous series Dance ’til Dawn. When she was 12, the famous actress landed the movie role of Jenny Matrix in the huge hit Arnold Schwarzenegger movie, Commando.

Additionally, Alyssa also featured in another popular series Melrose Place portraying the role of Jennifer Mancini. Back in 1998, she started to appear as Phoebe Halliwell in Charmed.

Furthermore, she acted in the series for almost eight series from 1998 to 2006. Some of her popular movies are Candles in the Dark, Embrace of the Vampire, Confessions of a Sorority Girl, Deadly Sins, and The Surrogate.

Apart from that, her recent ventures include the ABC drama series Mistress as well as also judged a season of Project Runway: All-Stars.

Moreover, Alyssa also worked as an activist in which she raised around $50,000 for South African women and children with AIDS. She also released a viral tape on Funny or Die which focused on the Syrian civil war.

Additionally, she appeared in a 2007 advertisement in support of PETA advocating vegetarianism.

She is the three-time winner of the Blimp Award and Young Artist Awards for her role in Who’s the Boss?

Is Alyssa Milano involved in any rumors and controversies?

She was rumored to be dating David Arquette, Fred Durst, and Greg Vaughan.

Once, Alyssa was involved in the controversial sexual harassment comments of Matt Damon. She took Twitter to reply to Damon,

Alyssa Milano has an hourglass-shaped figure with a height of 5 ft 2 inches and weighs 51 kg. She is a brunette with light brown eyes. Her shoe size and dress size are 6(US). Her body measurement breast, waist, and hip size are 37-25-36 inches.

Moreover, she has seven tattoos on her body.