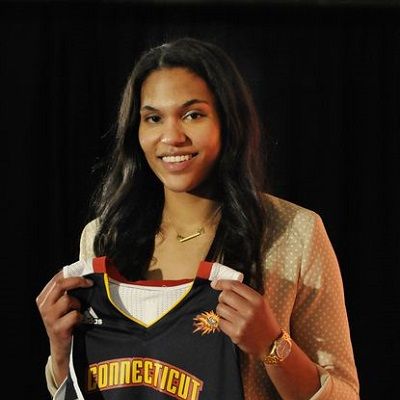 The trophy, its a championship game. Thats all I need. Im just playing basketball. Today I just shot my shot

Share your thoughts on Alyssa Thomas's quotes with the community:

When it comes to love and relationship, the 27 years old basketball player Alyssa Thomas is secretive and not open towards media. She has not mentioned dating anyone and her name is not linked with anyone either.

It seems like Alyssa is single and more into keeping her personal life away from media.

Who is Alyssa Thomas?

In women’s basketball, the name of Alyssa Thomas is pretty popular. Alyssa is an American professional women’s basketball forward for the Connecticut Sun. Similarly, she plays for the Women’s National Basketball Association (WNBA).

She was drafted by the New York Liberty 4th overall in the 2014 WNBA Draft. She was named the ACC Female Athlete of the Year in each of her last three seasons at the University of Maryland.

Alyssa was born on 12th April 1992 in Harrisburg, Pennsylvania. She was born to father Bob Thomas and mother Tina Thomas. She has two siblings Devin Thomas (brother) and Alexis Thomas (sister). Her brother Devin is the former Wake Forest player.

She was interested in sports from an early age. Similarly, she mentioned about being a shy kid and basketball has helped her become more comfortable with herself. It was her mother who signed her for basketball to help her get out of her shell.

Her mother’s decision worked out as she is more open when she is playing basketball. At that time, Alyssa was more into soccer and she was good at it too. But when her mother signed her up for basketball she was not happy about it. Later on a rainy day, she played soccer in the rain which made her quit soccer.

When it comes to basketball she is a very competitive person. He belongs to American nationality.

Now talking about her education, she educated from the Central Dauphin High School in Pennsylvania where she became the school’s all-time leading scorer.

When she was a freshman at college she was named the 2011 ACC Rookie of the Year and she was selected to the All-ACC Second Team. She scored an average of 14.5 points per game as well as 7.3 rebounds and 2.1 steals per game in her team.

When she was in her sophomore season, she came to national attention as she leads the ACC by scoring 17.2 points per game. Similarly, in the junior year, she became the first person in NCAA or WNBA history to average over 18 points, 10 bounds and 5 assists for an entire season.

Alyssa was drafted 4th overall by the Connecticut Sun in the 2014 WNBA draft. Similarly, in her rookie season, she averaged 10.0 points and 5.1 rebounds in her with the Sun in 34 games with 28 starts. In the year 2017, she scored a career-high 26 points in an 86-76 win over the Washington Mystics.

Alyssa has an estimated net worth of around $500,000. Similarly, she has around $75,000 salary from the Connecticut Sun team. The highest-paid record of the WNBA player is around 110,000.

The 27 years olf basketball player has a tall height which is 6 feet 2 inches and she weighs around 84 kg. Similarly, she has black color eyes and brown color hair.