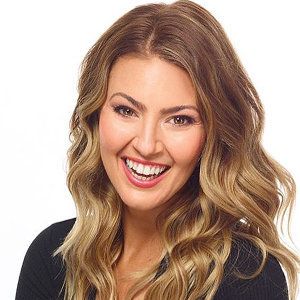 Amanda seems to be single and there is no information about her past relationships. But on 19th March 2016, she tweeted that she had many ex-boyfriends. But she isn’t seen yet spotted with any boyfriends.

Who is Amanda Balionis?

She was born on 20 June 1987, in Pittsburgh, Pennsylvania. Her father’s name is Anthony Balionis and her mother’s name is Dana Balionis. Balionis used to play volleyball from her young age and was very interested in sports. Well, she was even so much fascinated by Sports since her tender age and that led her to attend Hofstra. She doesn’t seem to have any siblings in her family.

Her nationality is American and her ethnicity is Caucasian.

Balionis completed her primary education at Manheim Township High School from 2002 to 2004. She studied Broadcast Journalism at Hofstra University and complete graduation in 2008.

She was having her internship for New York Jets, ABC News NOW, New York Islanders, and CBS2 and was studying also. Same time she thought of working in journalism and start her career. Then she worked for the local Lancaster Newspaper as a Reporter. It was between 2008 and 2009 when she worked as a Reporter. She used to host a weekly segment along with editing and hosting a range of sporting segments.

Amanda Balionis’s career takes a turnover when she has received an opportunity to work on TV. She no sooner was seen working as a Freelance Sideline Reporter for Verizon Sports. And in the year 2009, she became a reporter at MSG Network. Then she started to covered several high school sports.

No sooner she interviewed for a digital position with PGATour.com in 2011. Then she gains much popularity after interviewing it and was well known by most. And in the year 2017, she became a golf reporter at CBS Sport. Then she also worked for other various shows.

She worked at  Trending on Tour,  and on Buy a Mulligan, likewise also at PGA Tour Live. The reporter was able to cover different tournaments on CBS, such as the Masters and the PGA Championship. She also works as a contributor for Turner Sports digital.

She has built a good career and is appreciated for her works. But she hasn’t received any rewards or awards yet.

The sports journalist Balionis has garnered a large amount of money which as per some online sources is believed to be over $0.5 million. She currently serves as a golf reporter at CBS Sport where her annual salary ranges from $37,446 to $147,782.

There were rumors that she was pregnant. Whether she was pregnant or not it is not confirmed and whose child is it, it’s still a mystery. And there are no other controversies she has been then this.

Amanda Balionis has maintained an attractive fit body standing with a height of 5 feet and 5 inches. Likewise, the reporter weighs 57 kg. Her body measurement is 37-25-36 inches. Her dress size is 8 (US). She has brown colored hair and eyes.