Who is Amanda Batula husband?

Amanda Batula is a married woman, who married her Summer House co-star, Kyle Cooke after having affair for a few years.

The loving pair got married in September 2021 in the backyard of Amanda’s parents’ home in Hillsborough, New Jersey.

Amanda and Kyle have no plans of having children as of 2022. 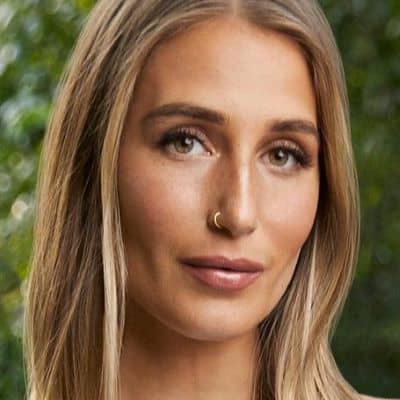 Who is Amanda Batula?

She is also a trending reality TV star who featured on Summer House and its spin-off series Winter House.

Amanda was born in Hillsborough, New Jersey, the United States on July 24, 1991, to a Christian family. According to astrologers, she is a 30-year-old Leo and resembles the Caucasian ethnicity.

Her father’s name is Frank Batula while her mother is Donna Batula. She also has a brother Frank Jr. whom she grew together in New Jersey.

Amanda first started her early schooling in a school in Somerset County. Next, she graduated from Hillsborough County High School and joined the University of Connecticut. From the same university, she got a Bachelor of Fine Arts degree in Communications Design.

To begin with Amanda’s career, she is a reality TV star, Instagram star, TikToker, and designer by profession. She along with her husband Kyle Cooke appeared on the Television series Watch What Happens Live with Andy Cohen. She is a creative designer at Drink Loverboy, owned by her husband.

Summer House is an American reality television series, which premiered on January 9, 2017, and airs on Bravo. Currently, it is running season 6 since its premiere on January 17, 2022.

The reality show comprises a summer house in Montauk, Long Island, where nine friends live, and includes the drama of love, celebration, and hookups.

The estimated net worth of reality TV star Amanda Batula is $1 M, which she garnered from Summer House and earnings from social media. The wiki of her salary, luxuries, cars, brands, and investments will be updated soon.

There were many rumors relating to her love life with her husband, but she made it to the aisle. presently, she is not indulging herself in unnecessary controversies that impact her personal and professional lives.

Amanda Batula stands 5 feet and 7 inches tall and weighs around 55 kg. Her chest-waist-hip measurements, dress, and shoe size are under review.

Regarding social media, Amanda Batula is active on Instagram @amandabatula with 535k followers. She also is a TikTok content creator with 74.8k followers and around 1 M likes.