Amanda Blake was an American Actress who died due to oral cancer in 1989. 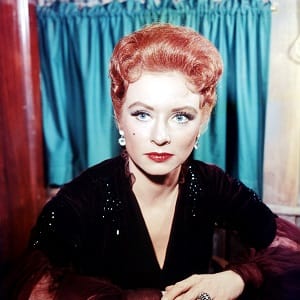 Amanda Blake has married a total of four times in her career.

Who was Amanda Blake?

Amanda Blake was an American actress. People mostly know her for the role of Miss Kitty Russell on the television series ‘Gunsmoke’.

Additionally, she was also an animal welfare activist.

In 1977, this actress had surgery for oral cancer. She passed away on August 16, 1989, at Mercy General Hospital at age 60. Later, it was reported that she had died of AIDS.

Blake was born in Buffalo, New York on February 20, 1929. She was born to parents Jesse and Louise Neill. Additionally, she was interested in the world of acting since her childhood years.

She was of American nationality and her ethnic background was mixed(English and Scottish).

Amanda Blake initially appeared as Faith Radmore Samuels in ‘Stars in My Crown’. In 1950, she had the role of Linda Kinston in ‘Duchess of Idaho’. Additionally, she also appeared as Karen Michelle in ‘Counterspy Meets Scotland Yard’.

In 1951, Blake had roles in ‘Smuggler’s Gold’, ‘China Corsair’, ‘Never Trust a Gambler’, and ‘The Family Secret’. Since then, she appeared in numerous other movies and television series. All in all, she had over 40 credits as an actress.

Some other movies and television series that Blake had appeared in are ‘Dragnet’, ‘B.O.R.N.’, ‘The Boost’, ‘Gunsmoke: Return to Dodge’, ‘Brothers’, ‘Hart to Hart’, ‘The Love Boat’, ‘The Quest’, ‘Betrayal’, ‘The Edge of Night’, ‘Clown Alley’, ‘The Red Skelton Hour’, ‘General Electric Theater’, ‘Steve Canyon’, ‘Studio One in Hollywood’, ‘State Trooper’, ‘Alfred Hitchcock Presents’, ‘High Society’, ‘The Glass Slipper’, ‘Miss Robin Crusoe’, and ‘The Adventures of Hajji Baba’ among others.

Apart from her work in movies and television, Blake also worked on several animal welfare projects.

Blake had a net worth of around $ 500 thousand at the time of her death.

Blake was not involved in any notable controversies in her career. Her death, however, was controversial after it was revealed that she had actually died of AIDS.

Talking about her body measurement, Amanda Blake had a height of 5 feet 6 inches (1.68 m) and had a decent weight. Additionally, her hair color was dark brown and her eye color was blue.