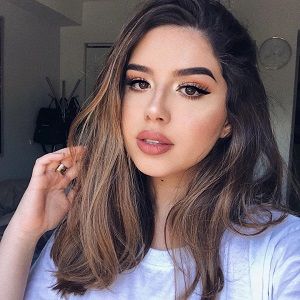 The 17-year-old American YouTuber, Amanda Diaz is currently single. Furthermore, she has not been in any relationship to date. Although, she has been posting regular along with Jake Warden on her Instagram account. However, she later clarified that he is just a best friend of her.

In addition, she has never been involved in any affairs to date. Currently, she is so young and fully focused on her career. As per the reports, Amanda is currently single and living beautifully.

Who is Amanda Diaz?

Amanda Diaz is an American YouTuber who runs a make-up channel. She has earned over 195k subscribers on her self-titled YouTube channel. Furthermore, she is also an Instagram star with more than 131k followers.

Amanda was born on November 17, 2000, in Cuba. Her family moved to the United States of American when she was very young. Talking about her nationality, she is Cuban-American and her ethnicity is unknown. She grew up in Miami, Florida along with her parents. Moving towards her education, currently, she is pursuing her high school study.

Amanda began her career as a YouTuber as she opened her YouTube channel in July 2014. Since then, she has been posting various videos relating to fashion, makeup, and traveling. On her YouTube channel, she has also posted a makeup tutorial inspired by Kylie Jenner. So far, she has collaborated with various popular YouTube stars such as Jake Warden, Julio, and few others.

Currently, she has earned over 195k subscribers on her self-titled YouTube channel. Furthermore, she is also an Instagram star with more than 131k followers. Some of her most-watched videos are 16th Birthday, Fall Makeup Tutorial, My Go-To Glam Makeup Look, Baddie Makeup Tutorial, Cet Ready With Me, and few more.

Being a famous YouTuber and Instagram star, she pockets a healthy amount of money from her profession. However, her salary and net worth are unknown.

So far, Amanda has not won any awards in her career. Although, she has just started her career and she has been doing a great job in her field.

As of now, there are not any drastic rumors regarding her personal and professional life. Moreover, she has never faced any controversy in her career to dare. It seems she has total focus on her work rather than stuck in any controversy.