Amanda Holden is a British singer, presenter, and actress who is best known as a judge on the talent show Britain's Got Talent. She is married and a mother of two.

Amanda Holden is a married woman. She has been married to comedian Les Dennis since 4th June 1995. But, at the same time, she had an affair with actor Neil Morrissey which was exposed by the media. So Amanda and Dennis permanently separated in December 2002 and their divorce was finalized on 18th November 2003.

She welcomed a daughter named Alexa Louise Florence Hughes on January 20, 2006, with her then-fiancé, Chris Hughes, a record producer.

Holden and Hughes married on December 10, 2008, after four years of engagement at Babington House, Somerset. The couple suffered a miscarriage in May 2010 and they lost their son Theo Hughes.

After that, they welcomed a daughter Hollie Rose Hughe on January 23, 2012, at the age of 40. Amanda did not see her daughter for 3 days after giving birth due to them being in critical condition. 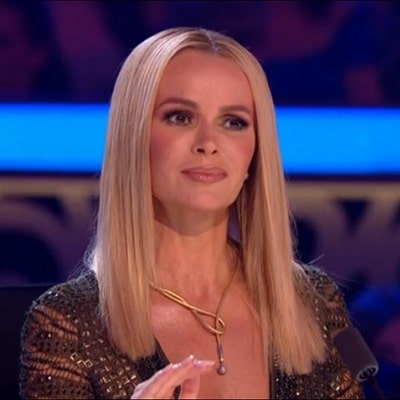 [Susan Boyle] She'll be an international superstar - but I don't think she'll have longevity. This world is fickle

we pick people up and spit them out just as quick.

[to Susan Boyle for the Britain's Got Talent 2009 final] I am proud you represent Britain so brilliantly. I just want to apologize for...the way we treated you before you sang the first time. You made me and everyone else look very stupid.

[listening to Susan Boyle on CD] Her voice rang out in the darkness and it was the most ethereal, spiritual moment ever.

Who is Amanda Holden?

Amanda Holden is a British singer, presenter, and actress who is best known as a judge on the talent show Britain’s Got Talent. Also, she depicted the title role in ‘Thoroughly Modern Millie’, for which she was nominated for a Laurence Olivier Award.

She was born on 16 February 1971 in Portsmouth, Hampshire, UK. Her birth name is Amanda Louise Holden. She was born to father Frank Holden and mother Judith Mary Harrison. She has a younger sister named Debbie Holden who is now a model.

Amanda holds British citizenship but her ethnicity is a mix of English and Cornish.

She attended Bishop’s Waltham Little Theatre Company which marked the starting point of her career in acting. After that, she attended Swanmore Secondary School and moved to Bournemouth at the age of 16  to attended the Mountview Academy of Theatre Arts.

As in movies, Amanda Holden has played the role of Pamela in Intimate Relations (1996), as a  shoe shop assistant in Virtual Sexuality and was given an uncredited role in the movie One Chance (2013).

Moreover, she joined the British newspaper News of the World in July 2009 as a gossip columnist. She published her autobiography called No Holding Back in October 2013 which went on to become a Sunday Times best-seller.

She is currently working as the judge of the reality show Britain’s Got Talent and has been on the show since 2007.

As of 2022, he has an estimated net worth of around $8 million and she has earned that sum of money from her professional career.

There was a rumor that she enjoyed a romantic date with Simon Cowell and he tried to wine and dine her but she insisted that it was not a date.

Know more about the interior details of the homes of Amanda Holden!

Amanda Holden is petrified after a male in a Volkswagen car follows her and parks his car in her driveway!!!