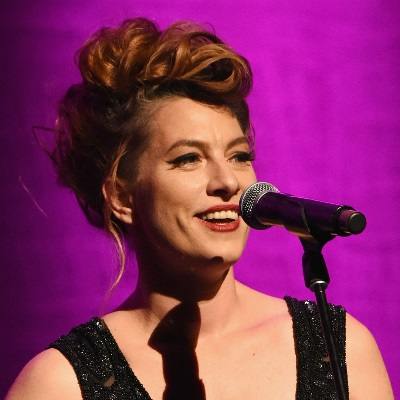 Who is Amanda Palmer?

American Amanda Palmer is a singer, songwriter, and musician. Plamer is renowned as the lead vocalist and pianist of The Dresden Dolls.

At the end of 2019, she was on an international tour for her latest album, There Will Be No Intermission. However, she struck at Havelock North, New Zealand when the country accounted for COVID-19 Alert Level 4: complete lockdown.

In 2020, she made her announcement her upcoming podcast, The Art of Asking Everything.

Amanda Palmer was born on 30th April 1976 in Mount Sinai Hospital of New York City. Her birth name is Amanda MacKinnon Gaiman Palmer. She is of British-French ethnicity.

She is the daughter of Jack Palmer and Kathy Mocket. Her parents got separated from each other via divorce when she was just one year old. After that, she remained with her mother, Kathy, and hardly met her father.

She spent her all childhood in Lexington, Massachusetts where she completed her High School education at Lexington High School. In High School, she actively took part in the various program as a member of the drama department. Later, she joined the Wesleyan University.

– She started her career as a performer during her High School and University. Later, she spent her time performing street as a living statue called, The Eight Food Bride in Havard Square. In 2000, she formed the duo, The Dresden Dolls along with the musician, Brain Viglione after meeting at the Halloween Party

– The following year, the duo made debut with the live album, A Is for Accident. The album was launched on 27th May 2003 via Important Records. In September 2003, they launched their eponymous album, The Dresden Dolls with 12 tracks.

– Later, in 2006, the duo released its debut album, The Dresden Dolls Companion. She was the songwriter and composer of the album. Following that, they released albums like Yes, Virginia… and No, Virginia. In 2008, she took a break up from the duo as she was going through a rough path with Viglione.

– In 2007, she formed the musician duo with Jason Webley. As a member of Evelyn Evelyn, she released the album, Evelyn Evelyn (2010) and Eps called Elephant Elephant (2007).

– In 2008, she released her debut solo album, Who Killed Amanda Palmer under the recording label, Roadrunner with 15 tracks. The album peaked at the 77th position in the U.S Billboard 200.

– In 2010, she reunited with Brian as Dresden Dolls once more and started taking musical tours all over the world that includes the 2011 tour in Australia and Mexico, 2012 in Australia and New Zealand.

– Following that, she released her albums; Piano Is Evil, An Evening With Neil Gaiman & Amanda Palmer and Theatre Is Evil. On the 20th of February 2019, she launched her single, Voicemail for Jill.

As of 2020, she has an estimated net worth of $5 million. Her earnings as a singer and songwriter are in the range of $22k to $210k. Besides that, she also makes through the royalties of her albums and music.

Talking about net worth, her husband, Neil has an estimated net worth of $18.5 million. His net worth is attributed to his career as an author and writer.

She has brown eyes with brunette hair. She stands at a height of 5 feet and 8 inches and weighs around 65 kg.

To date, she has not been part of any kind of controversy and scandals that created headlines in the media. Besides that, she has managed to maintain distance from any type of rumors.