Amanda Righetti is an American actress, model, and producer. She has been married to her colleague, Jordan Alan and the mother of one kid.

Amanda Righetti is a married woman. She has been married to her colleague, Jordan Alan (movie director). The couple got married on April 29, 2006, in Oahu. Jordan is 16 years older than Amanda.

The duo welcomed their first child, a boy named Knox Addison on January 10, 2003. Her husband is very supportive and she is spending her luxurious life in a beautiful house in the US along with her family. 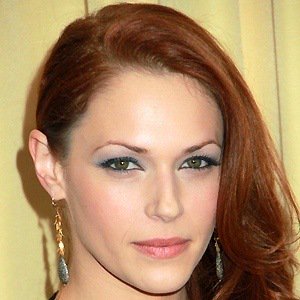 “Guys blow my looks up more than I ever would. I guess I have issues with myself. I don't think I'm as pretty as everybody thinks.”

Who is Amanda Righetti?

Amanda Righetti is an American actress, model, and producer who is best known for her role as Grace Van Pelt on ‘The Mentalist’. She is also well recognized for her performances in ‘Friday the 13th’, ‘The O.C.’ and ‘Colony’.

She was born in St. George, Utah, the U.S.A. on April 4, 1983. Her birth name is Amanda Elizabeth Righetti and she is currently 38 years old. Her father’s name is Alexander Dominic and her mother’s name is Linda Carol. Her mother belongs to German, French, and English ancestry while her father belongs to Italian ancestry.

She has got a brother and six children and she is the youngest one. She grew up in Nevada and inclined her passion towards the performing arts. She was already a good dancer at the age of 4. She was also interested in acting and modeling during her early ages.

When she was 15 years old, she was discovered in the International Cover Model Search and began her career as a fashion model before becoming an actress.

Talking about Amanda’s education history, she has not disclosed any information, however, it is under review.

Amanda moved to Los Angeles at the age of 18 and began searching for roles. She landed a role as Redding Teen in the episode ‘You’ve Got Male’ of ‘CSI: Crime Scene Investigation’ in 2001. She was cast in ‘Angel Heavener’ by David Heavener in 2002, and later portrayed the minor role of Debbie Fishman in ‘Greg the Bunny’.

The 35 years old actress portrayed the character, Hailey Nichol, in the drama series ‘The O.C.’ by the following year from which she gained more name and fame. After that, she appeared as Tessa Lewis in the series ‘North Shore’ from 2004 to 2005.

She became the cast of the CBS drama ‘The Mentalist’ in 2008 in which she appeared as a special agent Grace Van Pelt who is a member of CBI. However, she left the drama series after the sixth season.

Recently, she made her appearance as Madeline ‘Maddie’ Kenner in the series ‘Colony’ from 2016 to 2017 and as Jenna in the series ‘Love at the Shore’ in 2017. In addition, she gave the voice of Femme Fatale in the video game ‘Scarface: The World Is Yours’ in 2006.

Talking about awards and nominations, she was awarde3d the Best Actress by the Bew York International Independent Film & Vidoe Festival.

There was a rumor regarding the leaving of Amanda from the series ‘The Mentalist’ and the rumor ended after she left the series in its sixth season.

Also, she was rumored to be dating Gary Mantoosh but after long research, they were found to be just friends.