Amanda Schull is an actress, ballet dancer. Amanda is married to her highschool sweetheart since 2011. The couple became parents in 2020 with a baby boy. 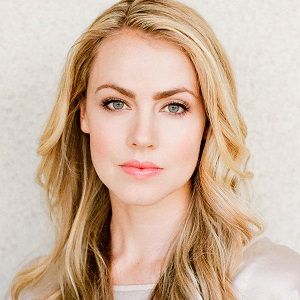 In high school ethics, they went around and asked what everyone thought their classmates were qualified to do. For me, everyone said actress. But to me it was very much 'if it happens, it happens.'

As a dancer, I know couples that have stayed married but separated to dance on different continents. Dance in general, but ballet in particular, is such a finite career. You can't do it later in life, and it's something that I think a dancer has to have some selfishness to fulfill.

I think people don't often realize how much goes into being a male dancer. It's athletic and it's hard. It's not just men wearing tights, or wanting to be around women.

What is the relationship of Amanda Schull?

Amanda Schull, beautiful actor and dancer, is married to George Wilson on 28th May 2011.

She was in a relationship with George Wilson from her high school and is sharing their love life since then. They are considered as one of the happiest couple doing very well in both professional and personal life.

Who is Amanda Schull?

Amanda Schull is an American actress and a ballet dancer who is eminent for her work as a Jody Sawyer in the 2000 film ‘Center Stage’ and as a guest star in some of the Television Series  One Tree Hill, Pretty Little Liars, and Suits. Apart from acting, she is a well-known former professional ballet dancer her mother being the president of Ballet Hawaii.

Born on 26 August 1978 in Honolulu, Hawaii, United States of America, Amanda Schull was raised with her parents having a perfect dancing environment. Amanda Scull was very passionate to make herself established in the field of acting and dancing.

So, to make her dream come true, she was exposed to some of the best ballet dancers from a very early age of life. Her mother, Susan Schull was a president of Ballet Hawaii and she also went for Hawaii State Ballet under the instruction of John Landovsky.

There is no doubt that she was all set to be a celebrity with great stardom because of her strong determination and her training with some professional dancers.

For her education, she went to Punahou School. Moreover, she attended Indiana University to major in Ballet dancing and Journalism and again transferred to San Francisco Ballet School and made her graduation in Ballet and Journalism.

She was enrolled in Delta Delta Delta. She got a full scholarship to Indiana University. After her graduation, she was offered an apprenticeship.

Amanda Schull started her career as an actor when she was an apprentice for San Francisco Ballet School playing the role of Jody Sawyer in the movie ‘Center Stage’ in the year 2000.

From this movie, she got immense popularity from her work in Center Stage which was followed by her role as a lead character’s older sister Davina Mayhan in the ‘YTV’ sitcom ‘My Family and Me’. She worked in San Francisco until the year 2006.

In 2008, she moved to Australia and did a movie Li Cunxin’s Mao’s Last Dancer. Amanda has also has appeared as a star on the Fox TV show in the year 2009.

Now, she started playing some recurring roles in the Television series The CW’s ‘One Tree Hill’, ‘Lie to Me’, ‘ABC Family’ series ‘Pretty Little Liars. In 2012, she got the role in McDonald’s commercial. In the same year, she was seen on the series Grimm, a character that resembles Cinderella.

In 2013, she played the role of Cassandra Railly on the television series ‘12 Monkeys’ which was broadcasted in mid-January 2015. Now, she is a well-known dancer and actor as well having the membership of the corps de ballet with the San Francisco Ballet.

With the help of some exceptionally well acting in movies and Television series made her worth reach $1 million as of 2022 and is one of the demanded dancers and actors as well.

In 2017, Amanda Scull was touched with some rumors about her plastic surgery.

Some news portals mentioned that Amanda Schull has some changes in her facial appearance and this could be the result of Plastic Surgery.

In an interview, Amanda shared that it was an awful process during the audition to be a part of 12 Monkeys as the female character of the movie was very strong.

Amanda Schull has an hourglass-shaped body with a body measurement of 36-26-37 inches. She wears the bra size of 34B, dresses size of 8(US) and shoe size of 6(US). Her height is 5 feet 5 inches and her weight is around 60 kg. Her hair color is dark blonde and has blue eye color.