Updated On January 29, 2023 | Published By: Ronald Bowman
Share this
In Relation 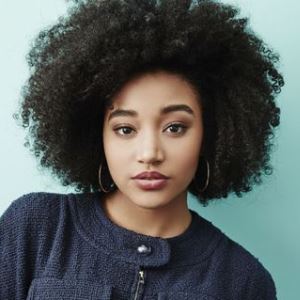 “What would America be like if we loved black people as much as we love black culture?”

“Bigger than you or me. Discussions are healthy. Ignorance is not.”

What is the relationship of Amandla Stenberg?

They are public about their relationship and are spotted at various events together.

Previously she was also linked with singer and songwriter Shawn Mendes. No further information is given about the previous relationship of Amandla Stenberg.

The relationship is going well without any separation rumors.

Who is Amandla Stenberg?

Amandla Stenberg is an American actor and singer from the U.S. She started her career as a child model. She was starred in the movies like The Hunger games, Everything, Everything (2017), etc.

Likewise, she has also done television series like Mr. Robinson, and Sleepy Hollow. Furthermore, she has spoken publicly on social media about cultural appropriation.

She was also named “feminist of the year” 2015 by the Ms. Foundation for women, with her outspoken views about political thoughts.  Moreover, in 2012 she was ranked no 1 for breakout kid actor by Entertainment Weekly.

She was born on October 23, 1998, in Los Angeles, California, the U.S. She was born to Karen Brailsford(mother) who was an African-American spiritual counselor and writer and Tom Stenberg (Father) who is Danish. She has two older half-sisters. Her first name means “power” or “strength” in the South African language.

Additionally, she started catalog modeling shoots at the age of four for Disney. She belongs to American Nationality. Also, her birth sign is Scorpio.

Talking about education, she is now officially a high school graduate and attended Wildwood School. At the age of 17, she received her graduation and shared two pictures on Instagram celebrating the experience. No further, information about Amandla Stenberg’s education is provided.

Talking about her career, at the age of four she started modeling shoots for Disney. As a younger version of Zoe Saldana’s she first featured in the film Colombiana in 2011. The Hungary Games was the film that caused a  breakthrough in Amanda’s career in 2012.

Then after, at Los Angeles venues she started singing and performing violin with singer Zander Hawley.

Similarly, she has penned a book, Niobe: She is Life, which she co-wrote with Sebastian Jones. Furthermore, Amandla published Ashley A.Woods in November 2015. In 2017, her second part of a trilogy, Niobe: She is Death was published.

Amandla Stenberg’s has a net worth of $3 million as of 2022, but, there is no information about her salary. But, looking at her lifestyle she seems to have a good income.

Rumors about Amandla Stenberg came out to be gay which was announced in the interview and Instagram posts.

Likewise, she was in a controversial when she talked about the discrimination which happens in the Hollywood industry between black and white race.

Talking about her body measurement, she has a height of 5 feet 3 inches and a weight of 56kg.

Her Body Measurements are 33-26-34 Inches. She has black hair color.

And her eye color is black. She wears a dress size of 4 (US) and her shoe size is unknown.