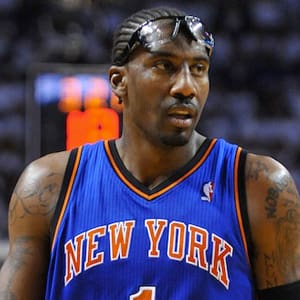 I want to apologize for my offensive comments against the LGBT community. These remarks were taken from a larger interview where a reporter was asking me hypothetical questions, and all my answers had a comedic undertone. The answers I gave were meant to be taken as jokes &

I am deeply sorry for offending anyone. I am open to creating a dialogue to assist the fight the LGBT community encounters daily and will continue focus on playing basketball

I'm actually very proud of my career. In my career, I've had some ups and downs. But I'm thankful that what I put into this game helped me achieve what I was able to accomplish. Hopefully, that gives me a bid into the Hall of Fame. That was my goal as a teenager, was to become a Hall of Famer. That's what I'm still striving for.

Although I would have liked to return for another season, the team, coach and I could not find a role that I felt would allow me to meaningfully contribute in the way I have always been accustomed to play. I feel it is my time now to return to the shareholder's position and help make this team even better. I would like to thank Hapoel Jerusalem president Ori Allon and the entire Hapoel Jerusalem organization for giving me the opportunity to retire as a champion, and doing it in the holiest of cities made it even more special

Stodemire got married with Alexis Welch on December 12, 2012 after getting engaged in May 2012. They dated each other since 10 years before their marriage(2002).

He recently admitted that he has an affair with Quynn Lovett and is paying $4333 a month for child support. Quynn Lovett claims that he father a little girl named Zoe Reneee.

Who is Amar’e Stoudemire?

Amar’e Stoudemire is an American retired expert basketball player of National Basketball Association. He played for 15 years of his career and currently holds his profession as an actor and producer.

Born as Amaré Carsares Stoudemire, on November 16, 1982, in Lake Wales, Florida, USA. He had a brother named Hazell Stoudemire Jr. and a younger half-brother named Marwan Wilmore. He is the son of Carrie and Hazell.

Police arrested Carrie many times for crimes like petty theft and forgery.

His father Hazell used to do lawn care and landscaping trained the Pop Warner football team his children played on and blew a mean saxophone.

His father passed away when Amar’e was 12 due to a heart attack.

He initially went to Lake Wales High School in Lake Wales, Florida. He then went to Mount Zion Christian Academy in Durham, North Carolina in October 1999.

For his further studies, he went to Emanuel Christian Academy in Leland, North Carolina and moved to West Orange High School in Winter Garden, Florida.

Because of the considerable number of exchanges in schools, Stoudemire missed his whole junior year of basketball. Aside from b-ball, Stoudemire exceeded expectations in football.

Stoudemire did not begin playing basketball until the point that he was of 14 years old. He just played two years of it in secondary school, however, in both, they called him the MVP of the Nike Summer League.

Among Stoudemire’s secondary school respects was being chosen to play in the 2002 McDonald’s All-American Game at Madison Square Garden in New York City.

With his greatest objective in secondary school being making it to the NBA, Stoudemire focused on the University of Memphis.

In any case, he later de-submitted and pronounced for the NBA draft on Phoenix Suns, being taken with the ninth pick in the 2002 NBA draft. Also, he was the main secondary school player taken that year in the first round.

On December 30, 2002, Stoudemire had his highest score by a prep-to-pro player. Later, in 2003, Stoudemire won the NBA’s Rookie of the Year award, winning over Yao Ming and Caron Butler.

In the year 2002, he was honored with the titles like Orlando Sentinel Florida High School Player of the Year, USAToday All-USA Basketball First Team and Prep Stars Recruiter’s Handbook #1 High School Player in the United States. Likewise, he and his team were honored as NBA All-Rookie First team.

Amar’e Stoudemire: Salary and Net Worth

According to a report of September 2017, he announced in his Instagram post saying he is retiring from basketball but also would like to return for another season.

In March 2017, he apologized for his statements saying his teammates are gay.

As for his body measurements, Stoudemire is 6 feet 10 inches (2.08m) tall and weighs 111kg. Furthermore, he has an athletic body and has dark blue colored eyes, black hair.

This basketball player has gained much of a fame in his social accounts too.