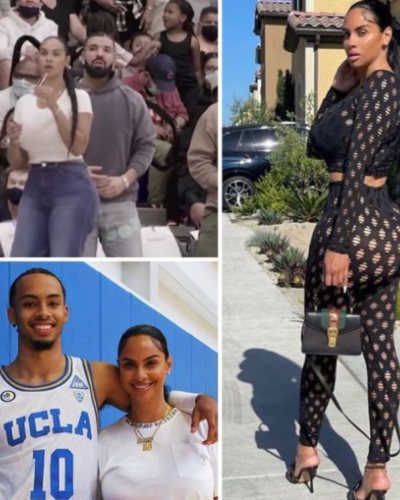 Amari Bailey the son of Drake’s girlfriend Johanna Leia is making a special place on Drake’s heart. On 12th August 2021, the high school basketball player showed his new custom OVO chain on the Instagram story which was gifted to him by Drake. It is a diamond-studded version of the number 10 to match his jersey.

Who is Amari Bailey?

Amari Bailey is an American basketball player who is committed to UCLA and is one of the top players in the 2022 class. He is from Chicago, Illinois was featured in Bringing Up Ballers. He competes for Sierra Canyon School in Chatsworth, California. As a freshman, he helped his team to win the Open Division state title.

When he was a junior, he averaged 29.2 points, 9.1 rebounds, and 6.5 rebounds per game. Likewise, he was named California Mr. Basketball, Los Angeles Daily News All-Area Player of the Year, and Gold Coast League MVP.

Also read Who is Johanna Leia? All about her relationship with Drake and insight into her life

Amari Bailey is the son of Aaron Bailey. His father is a former professional American football player who played as a wide receiver for the five seasons for the Indianapolis Colts in the National Football League. Also, he has played for clubs like Indianapolis Colts, New England Patriots, Chicago Enforcers, Carolina Cobras, San Jose SaberCats, New Orleans VooDoo, and Grand Rapids Rampage.

Her mother Johanna Leia is a model and has worked in the TV series Bringing Up Ballers. Likewise, the series followed Leia and four other Chicago area entrepreneurs who will make ensure their boys are on track to make it to the NBA.

Firstly, he is well-known an actor in the teen drama television series Degrassi: The Next Generation. In 2007, he released his debut mixtape, Room for Improvement. Read more bio…

All about the relationship of Karl Anthony Towns and Jordyn Woods!
Tags : Basketball player UCLA