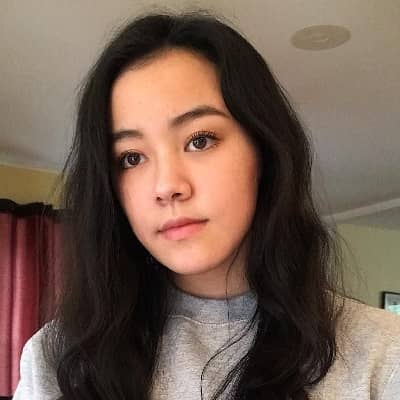 Amber Alexander is now enjoying her single. She hasn’t been seen dating anyone yet.

She is focusing on building her internet career right now.

Who is Amber Alexander?

Amber Alexander is a YouTube content creator and a social media personality. She is most popular for various clothing haul and vlogs on her self-titled channel.

Amber was born on October 6, 2001, in the USA. She holds an American nationality and has Mixed (Scottish, British, French, and Korean) descent.

Her father’s name is Edward Alexander. He was a pilot doctor. Amber has also posted various photos with him on her Instagram. Likely, her mother’s name is not known.

Amber has a sister named Ashley and a brother Andrew. They both have their own Youtube channels.

The star completed her schooling from her hometown. She graduated from high school on June 30, 2019. Likely, she is a student of Chapman University, California, and planning to has her major in television writing and production.

Amber is a social media personality and is a popular Youtube star. She launched her Youtube in Jul3, 2013. She is best known for publishing clothing haul and vlogs on her channel.

Her channel was before named “AMBERyeet” and is now named, “Amber Alexander”. Dam fools is her first video posted on the channel on Jan 3, 2018. The most popular video on her channel is, “transforming into an ABG so boys will finally like me”. It has amassed over 371K views.

Talking about her other popular videos, they are ‘impulsively chopping my own hair before college’, ‘Turning my brother into an indie sk8r boi’, ‘College APARTMENT TOUR + move in vlog!!’, and many more.

Amber must have earned some decent money from her internet career. Although the details regarding her earning haven’t been disclosed.

She also earns from her merch on Bonfire. She sells a various range of clothing.

The star has been building her career and influencing her audience in a positive way. She hasn’t appeared in any rumors and controversial news.

Amber has an average height and weight. Although its measurements are not available. Similarly, she has dark brown colored hair and eyes.

Likely, her official Tik Tok account also holds 92K followers with more than 1.9M likes. She is also active on Twitch and has around 3K followings. Similarly, she has her own YouTube channel with 199K subscribers.