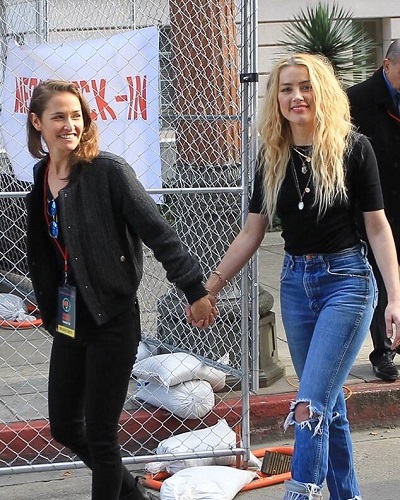 Amber Heard is stepping out with her new beau holding hand on hand. There is a new love in the life of American actress Amber. As per the source, the actress is dating cinematographer Bianca Butti. How did the new lovebirds turn their friendship into romantic hookups?

The American actress Amber has found love in the cinematographer Bianca. The couple walked holding hands and sharing kisses on the public. They are not hiding their building love life from the media and people in any way. One of the sources confirmed they are dating through the statement which reads:

“Amber and Bianca are dating and hooking up. Amber is not trying to be low key about it.”

The insider mentioned that the actress feels comfortable holding hands and kissing Bianca. Furthermore, the insider also added they started as a friend and now are dating each other. The rumors of their closeness started flying around after they attended 2020 Women’s Day March in Los Angeles on January 18.

There were pictures of them continuously holding a hand and walking together smiling at the event. After attending the event, the actress shared the picture of herself on Instagram with the caption which reads:

“Proud to stand alongside so many strong and courageous people in the fight for equality at the 4th annual Women’s March,”

However, they also stepped outside together a day ahead out for coffee in San Diego. At the time, they were walking to their car holding hands with the smile on their face.

A few days prior, they also shared a kiss in Palm Springs on January 14. The duo also left the  Colony Palms Hotel and drove on the car together.

Amber’s ‘coming out’ and previous relationships

The American actress came out as a bisexual to all the people out there in 2017. However, the response she received after that was something she never understood. Back in March 2017, when she attended The Economist’s Pride & Prejudice Summit, the actress spoke about it saying:

Furthermore, she also revealed that people warned her if she talks about her sexuality would affect a career. Moreover, mentioning she did not care about those warning, she stated:

The actress also mentioned though it did not affect her career, it made it somehow difficult for her. Previously, she briefly dated Andy Muschietti after her split with  Vito Schnabel in March 2019. The actress previously dated Elon Musk from 2016 to 2018. Amber also tied the knot with Johnny Deep back in 2015 and parted her ways in 2017.

Amber Heard is an American actress from Texas who gained recognition when she appeared in supporting roles in the Judd Apatow – produced stoner comedy “Pineapple Express”, and the martial arts drama “Never Back Down”, both of which were box office successes in 2008. All the Boys Love Mandy Lane, an unconventional slasher film in which she had one of her first leading roles. In 2009, Amber had roles in the horror films, “The Stepfather” and in three comedies: ExTerminators, Zombieland, and The Joneses. See more bio…

You may also read- Lori Harvey Confirmed The Dating Rumors; Got In Charge Of Hit And Run Case!

Sarah Hyland and Wells Adams are getting married! All the details here!
Tags : American Actress Model