Amber Lancaster is a The Bold and the Beautiful starrer actress. She is also an interior designer. Amber is married to a businessman A.J. Allodi.

Amber Lancaster is possibly single as of now.

Amber Lancaster married businessman A.J. Allodi in Palm Springs, California. In April 2019, she announced she and Allodi were expecting their first child in October 2019.

Their son Russell Levi Allodi was born in August 2019. Lancaster developed preeclampsia during her pregnancy which resulted in their son being born two months early in August 2019.

Sadly, Lancaster confirmed her split from Allodi in September 2020. 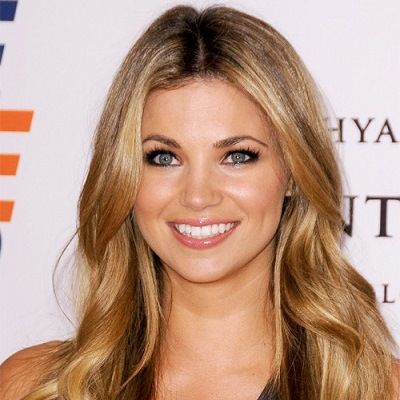 Who is Amber Lancaster?

Amber Lancaster is an American model, actress, and interior designer.

Likely, she is well known for playing Jenny Swanson on MTVs The Hard Times of RJ Berger, as well as being a model on The Price Is Right.

Amber Lancaster was born in Tacoma, Washington, United States on  September 19, 1980. Her birth name is  Amber Leigh Lancaster and she is currently 41 years old.

Her father’s and mother’s name is unknown. Hence, there is no much information about her and her family.

There is no information about her siblings. Amber holds American citizenship, and her ethnicity is Caucasian. Her birth sign is  Virgo.

Talking about her profession, Amber Lancaster’s career took off in no time. She soon landed a dancing gig on the syndicated dance show Soul Train where she danced regularly until 2006.

Then, she appeared in the 2006 feature film, Redline, as well as guest appearances on NBC’s soap Days of Our Lives (2007) and their short-lived drama series, My Own Worst Enemy in 2008.

Following up, she joined the cast of the longest-running game show in television history, The Price Is Right, as a model in 2008.

In the year 2010, Amber was cast as a series regular on MTV’s comedy series The Hard Times of RJ Berger as RJ’s love interest, Jenny Swanson. She has also appeared in episodes of hit shows such as Entourage, CSI: Miami, The Bold and the Beautiful, and Community.

On the modeling front, apart from the TV show, The Price Is Right, Amber Lancaster has featured in a number of magazine spreads and fashion features including Maxim, People, StyleWatch, US Weekly, Life & Style, and Star. As a nod to her model fit features, she has been featured as part of Maxim’s annual “Hot 100” list.

Besides her activity in the entertainment sphere, the Tacoma-born entertainer is also an entrepreneur. She owns an interior design business known as Lancaster Interiors which is into both residential and commercial designs.

When she is not working, she spends her time engaging in other activities such as cooking, catching a football game or catching up on her fave TV shows, going to the beach, and discovering new music.

She also supports a number of organizations including ASPCA, Safehaven, Asthma and Allergy Foundation of America, Special Olympics, and NBA Cares.

Amber debuted a clothing line with VICI Collection in November 2021.

This model has an estimated net worth of around $500 thousand as of 2022, and she has earned that sum of money from her professional career.

Rumors are that Lancaster and her husband are having some trouble in their marital affair. The sources say that the couple is heading for a divorce due to some differences.

However, we hope that they end their differences and head to start a new life together.

Amber Lancaster has a height of 5 feet 5 inches and she weighs is 50Kg. Additionally, she has a measurement of 33-25-35 inches and her bra size is 38C.

Her hair color is blonde and her eyes color is blue. Furthermore, her dress size is 6 (US) and her shoe size is 9 (US).

Also get to know more about Jordan Barrett, Kelsey Owens, and London Goheen.

Is Amber from Price is Right still married?

What does her spouse do?

How tall is Amber Lancaster?

Tags : American model Interior Designer The Bold and the Beautiful