Amber Nichole Miller is in a committed relationship with mixed martial artist and politician, Tito Ortiz.

In November 2014, the pair met when Amber was a ring girl during one of Ortiz’s fights. Shortly after, they started dating and they are together till now.

In August 2021, Ortiz proposed to Miller on their eighth dating anniversary. 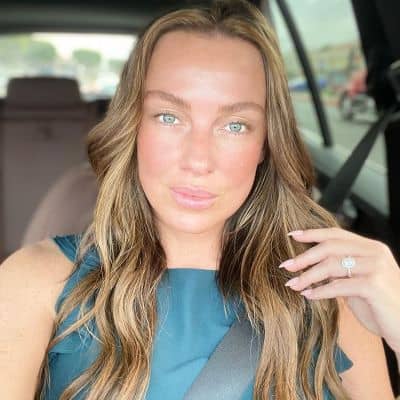 Who is Amber Nichole Miller?

Amber Nichole Miller is a model, actress, and child advocate. She has modeled for various covers such as Oxygen, DXL, and MMA Authority magazines.

Miller is also best known for being the fiance of Tito Ortiz.

She hasn’t yet disclosed her parent’s and siblings’ details in the media. Also, her academic background is under the curtains.

Further, she holds an American nationality whereas her ethnicity is unknown at the moment.

She was invited by Lorenzo and Frank Fertitta, the primary owner of the UFC at the time to work as an Ultimate Fighting Championship (UFC) octagon girl.

Similarly, she has posed and appeared in numerous ads and commercials. She appeared on the cover pages of popular magazines such as MAXIM, Muscle & Fitness, Oxygen, DXL Magazine, GQ, and more. Miller made her first television debut on a Disney Channel spot alongside Olivia Newton-John at the age of five.

Moreover, Miller has appeared in various UFC shows including Lingerie Bowl. In 2010, she hosted the TV show, “Ultimate Women Challenge”. She also starred in the TV series “WAGS LA”.

As of now, she hasn’t been part of any sorts of rumors and controversial matters that create headlines in the media.

Amber is living a luxurious life. As of 2021, her net worth is estimated to be around $2 million. Her salary and other earning are still under review.

Talking about her fiance’s income, Tito has estimated around $20 million of net worth as of 2021. He earns more than $1.5 million per year.

As a model, Amber has a well-maintained body physique with an average height. She has a fair complexion.

Amber stands at the height of 5 feet 8 inches tall and her weight is about 65 kg. Likewise, she has a brown pair of eyes and her hair color is blonde.