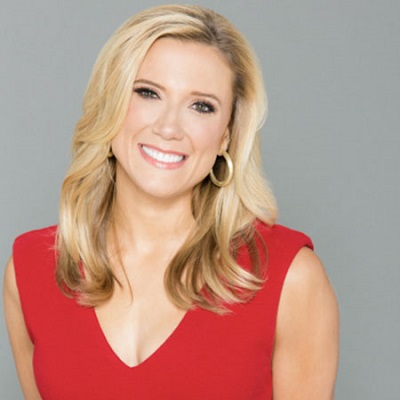 Amber Theoharis is a married woman. She has been married to Todd Buchler. They dated for some time before they tied their knot.

The couple is blessed with three children together: a daughter Dylan Mattea was born in the year 2010 and their second daughter Kamryn Olivia in 2013. Later, they welcomed Tyson whose date of birth and age is still unknown. She is currently living in Los Angeles, California with her family.

Who is Amber Theoharis?

Amber Theoharis is an American television personality, a professional journalist and a reporter who is known for co-hosting NFL Total Access on the NFL network. Also, she is the Emmy Award winner.

She was born on September 13, 1978, in Salisbury, Maryland, the USA. Her birth sign is Virgo. She was born to parents Kris Theoharis and Denny Theoharis. She grew up in a family who was interested in sports and she played various sports such as soccer, softball, and a basketball during her childhood. But she always wanted to be a sports reporter from an early age.

She attended Middletown High School in Maryland and graduated in 1996. Later on, she moved to the University of Maryland where she graduated with a Bachelor of Arts degree in Journalism

Initially, Amber worked as a sports talk host for WJZ-FM and for WRC-TV in Washington D.C and started working in Salisbury, Maryland at WLBOC-TV.

Then Amber Theoharis has worked in MASN as a reporter in the year 2007 in which she covered the Baltimore Ravens and reported during Orioles telecast. She left MASN in September 2012 and started working for NFL Network on NFL Total Access but she replaced longtime co-host, Kara Henderson.

In addition, she was named Baltimore’s most eligible bachelorette by Forbes. Also, she worked as a writer for Times of India in the year of 2013 & 2014. Amber has been well recognized in Baltimore Magazine and Forbes Magazine.

She has been awarded an Emmy Award for her work as a journalist. The National Sportswriters and Sportscaster Association honored her with Maryland Sportscaster of the year.

She has an estimated net worth of around $1.3 million as of 2019 which she earned from her work as a journalist. Also, she earns around $32,500 as she is a part of the NFL Network.

Amber has been successful in keeping herself far from rumors and controversies in her personal and professional life.

Amber Theoharis has a height of 5 ft. 0 inches and weighs 55 kg. Also, she has brown eyes and blonde hair. But her shoe size, body measurement, dress size, etc. are not available.