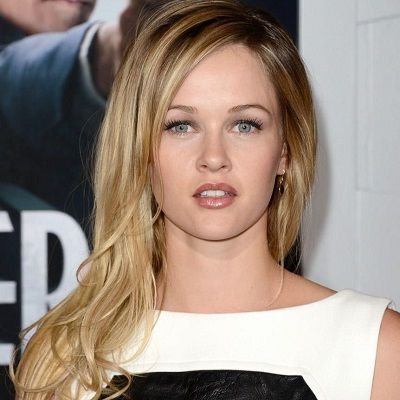 Ambyr C. Childers is currently engaged to Jeff Tinsley. He proposed Ambyr in January 2018 which she accepted and they got engaged. The happy couple posts each other pictures on Instagram.

Recently, she wished Jeff on Valentine’s Day by uploading a video of him.

Ambyr was previously married to Randall Emmett. Randall is an American movie and TV producer. They married in the year 2009.

Their marriage did not work out and Randall filed for legal separation in April 2015. Their divorce was finalized on 27th December 2017.  At present, Randall is engaged to model Lala Kent.

Who is Ambyr Childers?

Ambyr Childers is an American actress well-known for playing the role of Susan Atkins in the NBC crime drama Aquarius. She appeared as Candace Stone in the 2018-2019 TV series You.

Childers gave voice in the 2018 movie Pinocchio. She is a business owner with a jewelry line.

Ambyr Childers was born on 18th July 1988 in Cottonwood, Arizona, United States. She was raised in Murrieta, California. She lived in Southern California with her two sisters in 2002. But, she has not disclosed the names of her father, mother, and sisters.

She educated from the Vista Murrieta High School in Murrieta, California.

In the year 2007, Ambyr played the role of Hiker in L.A. 7. She appeared in Carolina, Dickie Roberts: Former Child Star, All My Children, and others.

Her other roles are in Love, All Things Fall Apart, House of the Rising Sun, Setup, Lay the Favorite, Playback, Crossfire, and others.

Similarly, she played the role of Trixie the Fox in Pinocchio, Elizabeth Dodd in The Master and Milk Skinned Blonde in Gangster Squad.

Some of her recent appearances include in You, The Magicians, A Moving Romance, Elephant Kingdom, Aquarius, Ray Donovan, Criminal Minds: Beyond Borders, The Frog Kingdom 2: Sub-Zero Mission and others.

Their jewelry line has items like Pendant, Necklace, Choker Necklace, and other designs.

Other than that, Childers has not been part of any big rumors and controversy.

Childers has blonde hair and grey color eyes. Similarly, she is 5 feet 4 inches tall and weighs around 58 kg.

Ambyr has around 431k followers on Instagram. She is following personalities like Arielle Charnas, Jacey Duprie, Lauren Paul, Patricia Wolf, and Hilary Duff.

Who is John Jovanovic? Know about his early life, married life with Daphne Oz, children, net worth, biography

Is Lala Kent getting married? The model has been spotted looking at engagement rings!