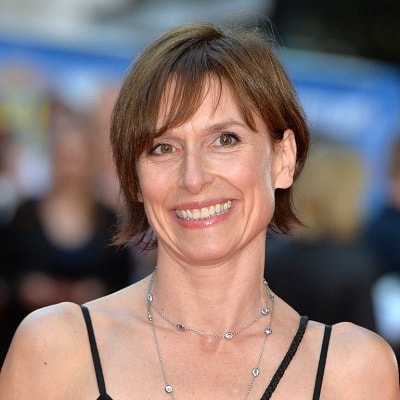 What is the relationship of Amelia Bullmore?

Amelia Bullmore is a married woman. She has been married to the Scottish actor Paul Higgins after dating for several months. The couple tied a knot in 1993 in a lavish ceremony including friends and family.

They met for the first time in Manchester in 1992 while performing A View from the Bridge. The couple is blessed with two children, Mary and Flora.

Who is Amelia Bullmore?

Amelia Bullmore is an English actress, screenwriter, and playwright.

She was born on January 31, 1964, in London, England, UK. Her birth name is Amelia Mary Bullmore. She was born to Jeremy and Pamela Bullmore. Her father is an advertising executive while her mother is a gardening writer.

She has two older brothers, Edward Bullmore and Adam Bullmore. Edward is a neuropsychiatrist and neuroscientist and Adam is a documentary filmmaker.

Amelia holds British citizenship but her ethnicity is unknown.

Talking about her education history, she studied drama at Manchester University.

Along with Helen Edmundson, she was a part of a cabaret named Red Stockings.

She used to perform at the Contact Theatre in Manchester which attracted the casting director for ‘Coronation Street’ and she was offered to play the role of Steph Barnes. She portrayed the regular role from February 1990 to September 1991.

Amelia Bullmore moved to London in 1995 and appeared as Sonja in series two of the BBC2 comedy series ‘I’m Alan Partridge’. In addition, she made her appearances in the crime drama ‘Scott & Bailey’ from 2011 to 2014.

The star, moreover, is also popular for the playwright. She wrote her first play Mammals in 2005. Next, she published her second play Di and Viv and Rose in 2013. It is s story about the friendship of three women over 30 years of University journey.

She won Dagger Award in the category of Best Supporting Actress for ‘Scott & Bailey in 2013.

Also, she won the Writers’ Guild of Great Britain Award in the category TV-Original Drama Series for ‘This Life’ in 1997.

She has an estimated net worth of around $1 million as of 2022 and she has earned that sum of money from her professional career. Also, she receives almost $30k to $50k per month.

Amelia has been successful in keeping herself far from rumors and controversies in her personal and professional life.

Amelia Bullmore has a height of 5 ft. 5 inches and has blue eyes and blonde hair.

But, her weight, body measurement, etc. are not available.