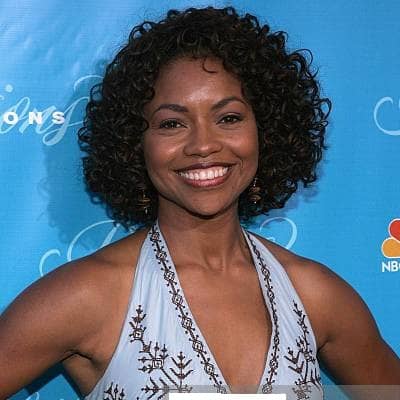 Amelia Marshall is a divorced woman.

Her first marriage was with Kent Schaffer in 1997. Together the couple has a son named Kent Marshall Dylan Schaffer. However, their marriage doesn’t long last and got divorced in the year 2001.

Before her divorce, she married Daryl Waters on November 28, 1992. After three years of marriage, the pair separated in 1995.

Who is Amelia Marshall?

Amelia Marshall is an American renowned actress and theater artist. She came into the limelight of the media after appearing on Passions in the role of Liz Sanbourne.

Amelia was born on the 2nd of April 1958, in Albany, Georgia, U.S. She holds an American nationality and belongs of All-American descent.

The actress has never shared his family details in the media so, the identity of her parents and siblings is under the curtain.

Taking about her academics, he studied at the High School of the Performing and Visual Arts in Houston.

Similarly, she received her bachelor’s degree from the University of Texas at Austin major in business administration.

Amelia started her career as a Broadway artist and landed a role on Big Deal. She has appeared in numerous Boardway such as Harrigan ‘n Hart, Minor Demons, Telltale Hearts, and more.

From 1989 to 1996, Marshall made an appearance on the CBS television soap opera, Guiding Light where she portrayed the role of Gillian “Gilly”, a television presenter. The series listed in Guinness World Records as the second-longest-running drama in television in American history.

As soon as she left Guiding Light, she was offered on the ABC television soap opera, ‘All My Children’ in the role of Belinda Keefer. She portrayed the character until 1999. Afterward, she made a contract for four and a half years on NBC television opera soap, Passions.

From 1998 to 2000, she regularly nominated for NAACP Image Awards in the category of Outstanding Actress in a Daytime Drama Series for her role Belinda Keefer in All My Children.

Likely, she nominated in the 2005 Soap Opera Digest Awards in the category of a Favorite Villainess for her role Liz Sanbourne in Passions.

Throughout her career, Marshall has not been part of any sorts of rumors and disputes that create headlines in the media. Also, she stays miles away from such controversial acts and scandals that hamper her personal and professional life.

Marshall might have earned a fair amount of fortune throughout her acting career. However, she hasn’t yet revealed his actual figure of net worth, salary, and real estate in the media.

Marshall has a slim body figure with dark complexions. She is 5 feet 5 inches tall whereas she has average weight.

However, the actual measurement of her weight and other body measurement is not available. Further, she has a curly brown hair color with brown pair of eyes.

It seems Marshall prefers to keep a low profile so, she is not available on any kind of social media site including Facebook, Twitter, and Instagram.

Amelia Earhart Mystery: The Photo Used For The Latest Of The Theory On Her Missing Taken Too Early To Be The Missing Pilot

New Theory Surfaces Up Regarding Amelia Earhart, Delve In To Know What It Has To Say Regarding Earhart’s Mystery