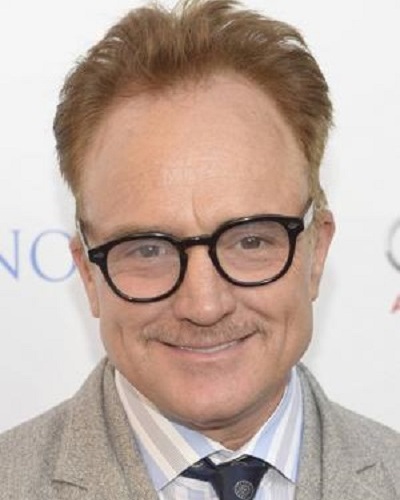 American actor Bradley Whitford eloped with his sweetheart Amy Landecker. The two are dating since 2015 and decided to wed on 18 July 2019. Later, they took to their respective social media to share the news with their fans and followers.

On Thursday, 18 July 2019, Amy Landecker, 49 put up a picture of herself with Bradley Whitford and their two dogs-Izzy and Otis. She was wearing a periwinkle dress that had pink floral prints.

While her new husband Bradley Whitford was in a white shirt and blue coat and trousers. Additionally, Amy was carrying a bouquet in her hands. Her head was leaned on Bradley’s shoulder. Amy captioned this picture:

The political activist Ady Barkan solemnized the marriage. It was held in the courthouse of Santa Barbara. Their two dogs were probably their only witnesses of this marriage.

On Wednesday, Bradley had shared the same picture on his Twitter account but captioned it differently. He wrote:

“In a shocking, totally unearned plot twist, Commander Lawrence married Mrs. McKenzie today in Santa Barbara. The shark may have been jumped, but the couple is thrilled.”

In a shocking, totally unearned plot twist, Commander Lawrence married Mrs. McKenzie today in Santa Barbara. The shark may have been jumped, but the couple is thrilled. pic.twitter.com/iPZtzCGbob

Bradley was referring to their respective roles in The Handmaid’s Tale. Bradley plays the character of Commander Joseph Lawrence in the series, while Amy portrayed the character of Mrs. McKenzie in one of its recent episodes.

Amy and Bradley met and began dating in the summer of the year 2015. It was in March 2018 that the couple announced their engagement. On 17 July 2019, Bradley was nominated for the 2019 Emmy Awards for his role in The Handmaid’s Tale.

It was in the outstanding guest actor category. And the next day they eloped. Though the couple has used the word eloped, a Rep for Amy told the Hollywood reporter that their kids were also present at the wedding.

Amy Landecker and Bradley Whitford – their previous marriages and children

For both Amy and Bradley it is their second wedding. Bradley married actress Jane Kaczmarek in 1992. They had three children together. They are daughter Mary Louisa, daughter Frances Genevieve, and son George Edward. But after 18 years of marriage, the couple split in 2010.

Also, read Miley Cyrus talks candidly about her attraction for women despite her ‘modern marriage’ to Liam Hemsworth!

Amy had an earlier marriage. And her husband was Jackson Lynch but their date of marriage remains unknown. Subsequently, the couple had one child before they divorced in 2011. And the child is now 14 years old.