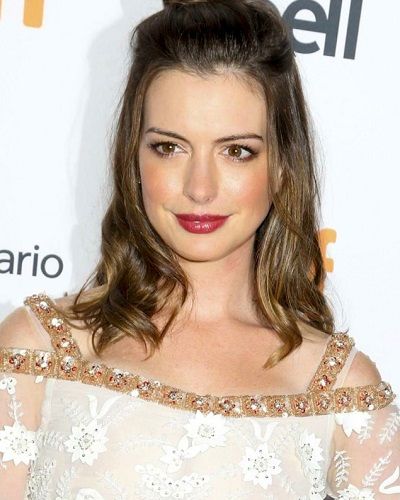 On Thursday 8th August, the American actress Anne Hathaway walked the red carpet. It was the opening of Broadway plays Sea Wall/A Life at the Hudson Theatre in New York City.

She was seen wearing a hot pink tea-length dress that featured a high neck and cutouts above her burgeoning belly. Her husband Shulman joined the Oscar winner for the event.

Likewise, she and her husband got close on the red carpet. She proudly flaunted her baby bump and she could not hide her pregnancy glow. Furthermore, she looked thrilled to support Gyllenhaal at the opening.

Also read American actress Amber Portwood and Andrew Glennon not talking to each other after her arrest! Know why was she arrested

The 36 years old actress Anne Hathaway is now pregnant with her second child in a post. She wrote a beautiful caption and shared her blossoming baby bump. She wrote,

For everyone going through infertility and conception hell, please know it was not a straight line to either of my pregnancies. Sending you extra love.”

Similarly, she decided to open up about her struggle to get pregnant. She wanted to help those people who are going through the same trauma feel “less isolated”. Also, she told Daily Mail that she was previously tormented by other women’s pregnancy social media announcements.

“Each time I was trying to get pregnant and it wasn’t going my way, someone else would manage to conceive,”

“I knew intellectually that it didn’t happen just to torment me, but, to be honest, it felt a little bit like it did.”

“By leaving out the sad part, we make women who are struggling with this feel like it’s all their fault. I wanted to be more sensitive than that.”

Who is the husband of Anne Hathaway?

Anne Hathaway is a married woman as she is married to Adam Shulman. They married on 29th September 2012. They have a child together. As they have a son named Jonathan who is now three years old.

They are a very happy couple and there is no news of any dispute between them. They are seen together many times.

In the year 1999, she dated Topher Grace. They dated until the year 2001 and broke their relationship. She dated Scott Sartiano in the year 2002.

After that, there was no rumor of her dating anyone. At present, she is a loyal wife and is happily living with her husband. She is currently pregnant with her second baby. Her husband Adam is an actor and producer. He is known for The Shower, Puzzler, and Liberation.

Also read Chinese – American actress-rapper Awkwafina is happy about the increasing representation and diversity of Hollywood!

Anne Hathaway is an American actress. She is known for her movies like ‘Les Miserables’, ‘The Dark Knight Rises’, ‘Rachel Getting Married’, and ‘Love and Other Drugs’. See more…

Hollywood beauty Anna Faris is looking skinny! What is ailing her?
Tags : American Actress Les Miserables Love and Other Drugs