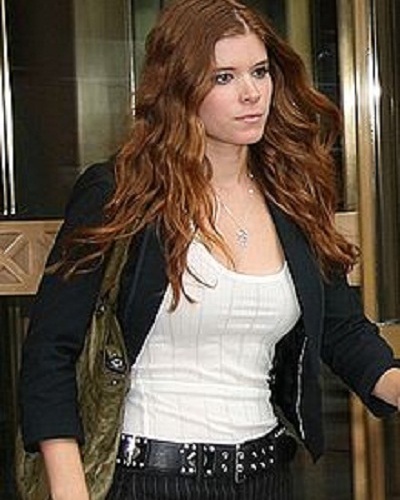 Kate Mara opens up about her first year of married life

“[It has been] fantastic. I feel like this year flew by,”

“It’s kind of shocking to me that it’s been a year. But yeah, I’m very lucky. … I genuinely feel like we just got married. It feels like yesterday to me.”

So what did they do on their first wedding anniversary?

Kate Mara said that they enjoyed a romantic candle-light dinner and also had a vacation but not outdoors. They stayed indoors at their home in Los Angeles.

Kate Mara and her plans for a family

Kate also mentioned that she and Jamie are planning to expand their family size pretty soon.

But in the meantime, she is happy taking care of her stepson Jack who is 4 now and is Jamie Bell’s son with his previous wife Evan Rachel Wood.

Kate told the US Magazine:

“I love it. I mean, I come from a really, really big family and I’ve had kids around me my entire life, I think I have, like, 90 first cousins or something. … Family is everything to me, and I like being surrounded by lots of kids and family at all times.”

Kate Mara and the double dates

The actress also mentioned that she and Jamie, 32 also go and enjoy double dates. Kate with her husband Jamie and her sister Rooney Mara with her boyfriend, Joaquin Phoenix– all four get together and do double dates.

“[Rooney and I] live in L.A. and the rest of our family is in New York, so we try to see each other as much as possible,”

“We talk about everything personal that you would talk [about] with your close friends, your siblings.”

But when her sister Rooney, 33, and her boyfriend Joaquin, 43 are busy and unable to come along with Kate and Jamie, the newlywed couple makes it as a twosome.

Their routine is like going to a movie and a dinner, watching the football every Sunday, and watching The Real Housewives of New York City. Kate revealed that her husband is a New York Giants fan and also is a fan of Dorinda {Medley]. She said:

“My husband is obsessed with Dorinda {Medley], so I kind of have a soft spot for her too.”

Kate Mara and her work for the dogs

Kate Mara has also partnered with DAWN and is with their wildlife campaign.

“I grew up in a house [where] we always had numerous dogs. My grandparents had a farm, so I spent a lot of time around horses. And my mom has always been very active and she had some therapy dogs as well. So, I just know the importance of animals and what they bring to our lives. One of my biggest passions is trying to give back and give them a voice.”

Kate Mara and Jamie-how they met?

Kate and Jamie were co-stars of Fantastic Four. They began dating at the end of 2015 and got engaged in January 2017. They released an official statement on 17 July 2017 to inform their fans that they have married.

Kate Mara is an American actress. She got huge recognition from the 2013 Netflix political drama House of Cards as Zoe Barnes. Furthermore, she has also appeared in the superhero film Fantastic Four as Susan. Moreover, her other notable works include The Martian, Morgan, and American Horror Story: Murder House. More bio…