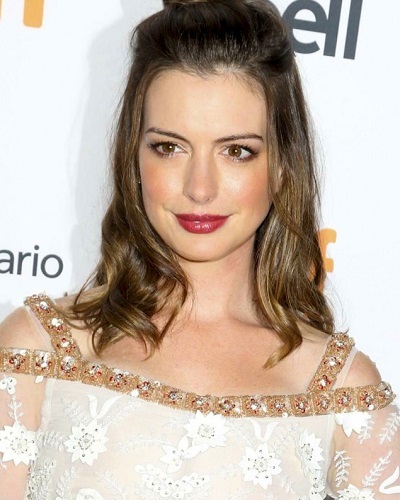 The Oscar-winning actress, Anne Hathaway was pregnant. She did not disclose the news of her delivery on social media. But it seems that she has already given birth to her second child with actor husband Adam Shulman. The couple was seen in a park and there was also a bassinet that they were carrying.

Anne and Adam were having some quality family time with their children in a park. Their older child son Jonathan Rosebanks Shulman, 3 was also with them.

The parents were taking turns watching the bassinet and pushing Jonathan on the park swing. Later, they headed for a stroll together.

There are no more details available about the delivery or the baby. She has been secretive about the second-born child.

“They seemed in great spirits,”

It was late in July that Anne revealed to her fans that she is pregnant. She uploaded a baby bump picture on her Instagram and captioned it:

“#2⁣ All kidding aside, for everyone going through infertility and conception hell, please know it was not a straight line to either of my pregnancies. Sending you extra love.”

Anne did not take a back seat after announcing her pregnancy. She continued to be active in her social life. Anne was spotted at many red-carpet events. She made special dresses for the occasion to accommodate her growing baby bump.

Her dress designer Brandon Maxwell had put on a special tag that read:

Anne was grateful and had written online:

“@brandonmaxwell, as if it wasn’t enough you custom-made me and the bump a knockout dress, you put this tag in it. Thank you, new friend,”

She also got another honor this year. She received a star on her name on the Hollywood Walk of Fame. Besides, in October 2019, she had a surprise baby shower party at her Big Apple home. This was attended by many of her famous friends including Jessica Chastain. An insider had revealed the details:

“Anne walked in and everyone yelled Surprise. She looked completely shocked and put her hand over her mouth then her face. She hugged one of her friends and said ‘You guys are so good’.”

Anne Hathaway is an American actress. She is known for her movies like ‘Les Miserables’, ‘The Dark Knight Rises, ‘Rachel Getting Married, ‘And Love and Other Drugs’. More Bio…