Skip to content
Married Biography
Married Biography / Entertainment / An American pop rock band- Against The Current (ATC) with band members Chrissy Costanza, Dan Gow, and Will Ferri. Tours a way to interact and entertain their fans!

An American pop rock band- Against The Current (ATC) with band members Chrissy Costanza, Dan Gow, and Will Ferri. Tours a way to interact and entertain their fans!

Posted by MarriedBiography Posted on May 3, 2019 | In Career , Interesting Facts
Share this 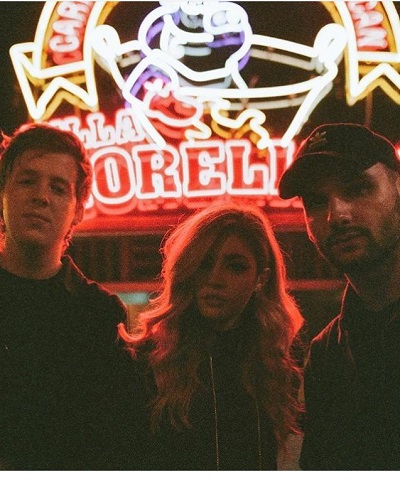 Against The Current also known as ATC is an American pop rock band. The band is basically based in Poughkeepsie, New York which was formed in 2011. The band currently consists of lead vocalist Chrissy Costanza, Dan Gow as a guitarist, and Will Ferri as the drummer.

Let’s know about them more!

EP and tours: interact and entertain their fans

In 2011, Christina Nicola Costanza met Dan Gow and Will Ferri through a mutual friend who later became band members. They formed a pop-rock group named Against the Current. Forming the group in 2011, they opened their YouTube channel in August and started uploading in July 2012.

In the beginning days, the group performed collaborations with fellow YouTube cover artists such as Alex Goot, Sam Tsui, etc. Finally, they came up with the debut non-album single, ‘Thinking’ in 2012. The following year, they had released a single from EP titled ‘Infinity’ titled ‘Closer, Faster’.

During the same year, the band also came up with their second non-album single, titled ‘Guessing’. Their first EP ‘Infinity’ was ranked at the 28th spot by the US Heatseekers Albums chart which was released on May 27, 2014.

Working on their second EP which is an acoustic version of ‘Infinity’ on the same year. Continuing their musical journey, they came up with their third EP titled ‘Gravity’ in 2015.

The third EP also reached the fourth spot on the US Heatseekers Albums chart. They also came up with the acoustic version of ‘Gravity’ in July of that year.

While going on a tour for promoting ‘Gravity’, they traveled across three continents. The band members said that the tour helped them interact and entertain their fans in other parts of North America, Europe, and Asia.

Coming up with studio album

After releasing a number of EP, the band finally decided to release their first ever studio album titled ‘In Our Bones’. Released on May 20, 2016, and was able to achieve the second spot on the US Heatseekers Albums chart.

Costanza the lead vocalist contributed as a lyricist to all of the songs in the album. The band went on tour for ‘In Our Bones’ tour. In 2018, the band came up with another album called Past Lives.

Also read: DNCE is an American pop band with Joe Jonas, Jack Lawless, Cole Whittle, JinJoo Lee-“imperfect awesome[ness] of the four of [them] together.”