Ami Dolenz is married to Jerry Trimble. Her husband, Jerry is a martial artist and actor by profession. The couple got married on the 10th of August 2002.

Till the date, the couple is leading a happy married life with no news of separation or divorce. 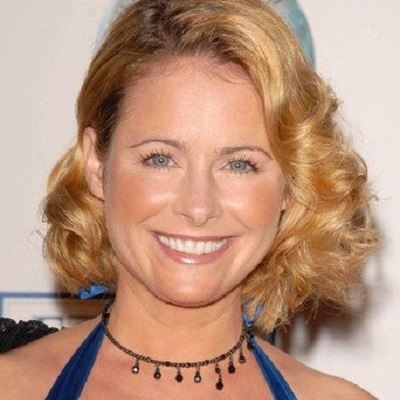 Who is Ami Dolenz?

American Ami Dolenz is an actress and producer. Ami Dolenz is renowned as Jeannie Peterson of the movie, Miracle Beach and Fran of Can’t Buy Me, Love.

Ami Dolenz was born as Ami Bluebell Dolenz on the 8th of January 1969 in Burbank, California in a showbiz family. She is of British-Irish ethnicity.

Her parents got married in 1968 and parted ways after seven years of marriage in 1975. They had always maintained their relationship as a friend after the divorce. On the 5th of February 2014, Juste passed away due to a stroke in Los Angeles.

She happens to be a single child from her parents. However, she has three paternal step-sisters; Georgia, Charlotte, and Emily from his second marriage.

Coming from a showbiz family, she always had an inclination toward the entertainment sector. At the age of 15, she decided to be an actress after winning a junior talent contest. To pursue her dream to be an actress, she gave up on her study when she was in High School.

In 1985, Ami Dolenz entered the TV industry with the series, Growing Pains with a minor character Linda. Following the series, she featured TV movies like The Children of Times Square and Shattered If Your Kid’s on Drugs.

Later, in 1987, she appeared in the movie, Can’t But Me Love as Fran. The movie became one of the milestones of her early acting career.

The next year, she landed the role of Melissa Mckee in the epic show, General Hospital. However, she appeared in the series of only four episodes. Despite having short screen time, she got noticed for her acting and got nominated for two Young Artist Awards.

Later, in 1990, she starred in the series, Ferris Bueller as Sloan Peterson. Unfortunately, the show got canceled after 13 episodes in 1991. Following that, she was featured in the movie, Miracle Beach. In the fantasy-comedy movie, she portrayed the character of the lead actress as Jeannie.

After the movie, she appeared in numerous series and movies. Some of them include Ticks, To Die, to Sleep, Virtual Seduction, and Mr. Id. After the movie, Mr. Id, she took a break from her acting career. After four years, she came back with the short, Even If that she produced too.

Currently, she helps her husband in the management of KidPix Productions. Also, she performs in Write Act Repertory Theatre. Also, she owns the online jewelry shop, Blueball Boutique.

As of 2020, she has an estimated net worth of $900 Thousand. As a producer, her earnings are in the range of $37k to $140k. Apart from that, she also makes it through her acting career and online jewelry business.

Ami Dolenz has blue eyes with blonde hair. She stands at a height of 5 feet and 3 inches and weighs around 56 kg.

As of now, she has not been through any sort of controversy and scandals that created headlines in the media. Also, she has managed to maintain a distance from any type of rumors too.

You may also read the bio of Lisa Clark, Cameron Fuller, and Elizabeth Smart.