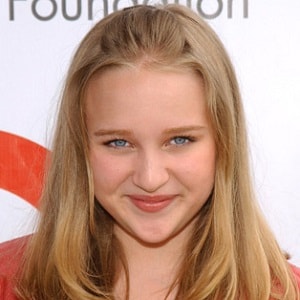 Amy Bruckner is currently single. She is focusing on her profession rather than being in a relationship. She might be in search of a perfect partner.

Who is Amy Bruckner?

Amy Bruckner is an American actress and singer. She is famous for her roles in the Disney Channel shows ‘Phil of the Future’ and ‘American Dragon: Jake Long’.

She was born on March 28, 1991, in Conifer, Colorado, USA. She is currently 27 years old. She has got an older sister, Annye Landaverde. She holds American citizenship and her ethnicity is German. She has not provided information about her parents and her childhood.

She attended Athens Academy in Athens, Georgia and graduated from there. Later, she joined Tisch School of the Arts at New York University.

She debuted her career in the fourth grade and guest starred in the shows like ‘ER’, ‘Malcolm In the Middle’, ‘The West Wing’, ‘Oliver Beene’, ‘Judging Amy’, and ‘Ally McBeal’.

With the Disney Channel Circle of Stars, she sang a backing soprano vocal role in Cinderella’s song ‘A Dream Is a Wish Your Heart Makes’.

Amy has an estimated net worth of $1 million and she has earned that sum of money from her professional career.

She likes to keep her lips tight. She has not been involved in any rumors, scandals, and controversies in her life.