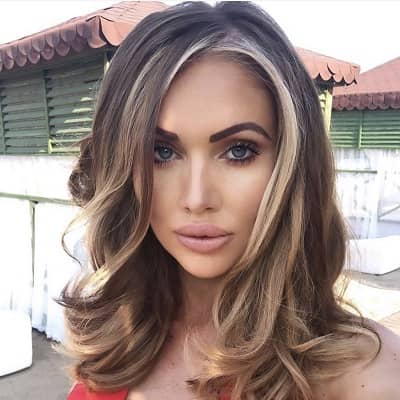 Source: The Can Group

What is the relationship of Amy Childs?

Amy Childs is currently in a relationship with Billy Delbosq.

Previously, she was in a relationship with Bradley Wright from 2013 to 2017. In April 2017, she gave birth to her daughter Polly. After the birth of their daughter, the pair separated.

In September 2018, she gave birth to her second child, a son.

Who is Amy Childs?

Amy Childs is an English model and television personality. She debuted in The Only Way Is Essex’s first two seasons on ITV2, from 2011 to 2012, then she starred in her own reality series, it is All About Amy.

She was born to Billy Childs and Julie Childs. As she is the only child of her parents, there is no information about her siblings.

Regarding education, she enrolled in Raphael Independent School where she was as head girl and graduated with four GCSEs.

After appearing in ITV2’s reality series The Only Way Is Essex, Amy gained fame in 2010. Afterward, she joined the management company Can Associates. Also, she is well known for her role in Celebrity Big Brothers’ eight seasons.

She has posed as a model for Vogue fashion magazine. Furthermore, Amy received the National Reality Tv Awards Personality of the Year honor in July 2011. She made an appearance in Its All About Amy, a Channel 5 reality series that premiered from December 2011 to January 2012.

Amy and her cousin Harry Derbidge starred in a Let’s Dance for Sport Relief program in February 2012. Then in March 2012, she took part in a celebrity-only episode of The Bank Job on Channel 4.

Childs was a main cast member of Celebs Go Dating’s eighth season on E4 in 2020. The same year it was reported that she will be making her nine-year return to The Only Way Is Essex in the 26tth season along with her cousin Harry.

Being a successful model, and TV personality, she has earned a hefty sum of money from her profession. Her net worth is estimated to be $6 million, whereas her exact salary or income is yet to be determined.

Amy removed Bradley Wright from her home after hearing rumors that he had been sexting a different woman. Last month, it was reported that Marie Asemota 36, received sexually explicit messages from Brad.

Amy stands at an average height of 5 feet 6 inches. She has a slim and lean body weighing around 50kgs.

Moreover, she has a gorgeous look with a pair of hazel eyes.

Carringtonxx
Tags : ‘The Only Way Is Essex’ Model TV Personality

Amy Childs – relationships, children, and her desire for life stability!

The British Charity The Lullaby Trust has warned celebrity mothers to be careful of what they post on social media!