Amy Grant is a Christian Queen of Pop and a Grammy award-winning musician. Amy is married and a mother of four. 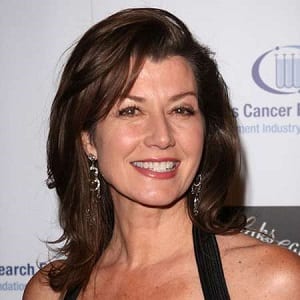 I guess a part of being deceived, is that you wouldn't know it.

Just growing up some, and encountering experiences that proved beyond a shadow of a doubt that I do not understand God's plan.

I was a Bush supporter, but I was bowled over with President Clinton's personal magnetism when I met him. I was so not expecting that. He has amazing charisma. His charisma can stop a room. And it's everything, it's male... He's just bigger than life. Very embracing, very warm.

[1985] I'll tell ya, singin' isn't any good unless you have something good to sing about.

What is the relationship of Amy Grant?

Amy Grant is a married woman. She is married to Vince Gill. Her husband Vince is a country singer-songwriter.

She was previously married to fellow Christian musician Gary Chapman. The pair married on June 19, 1982.

They have three children together: Matthew Garrison Chapman, Gloria Mills Chapman, and Sarah Cannon Chapman. The pair later divorced in 1999.

Who is Amy Grant?

Additionally, she is often referred to as ‘The Queen of Christian Pop.’

Grant was born in Augusta, Georgia as Amy Lee Grant on November 25, 1960. She was born to parents Burton Paine and Gloria Grant.

Additionally, she is the youngest of four sisters. She became interested in the world of music as a child.

Talking about her father, she was born to her late father Dr. Burton Grant.

In addition, she was a member of the Nashville’s Ashwood Church of Christ.

Amy is of American nationality. Furthermore, she belongs to a mixed ethnic background of English, Scottish, and Welsh.

When did Dr. Burton Grant die?

Grant initially recorded a demo tape for the parents of her song ‘Mountain Top.’ After Chris Christian heard the demo, he offered a recording contract five weeks before her 16th birthday.

She released her first album ‘Amy Grant’ in 1977. In addition, her other albums include ‘My Father’s Eyes’, ‘Never Alone, ‘Age to Age’, ‘A Christmas Album’, ‘Straight Ahead’, ‘Unguarded’, ‘Lead Me On, ‘Heart in Motion’, ‘Home for Christmas’, ‘House of Love’, ‘Behind the Eyes’, ‘A Christmas to Remember’, ‘Legacy… Hymns and Faith’, ‘Simple Things’, ‘Somewhere Down the Road’, and ‘How Mercy Looks from Here’ among others.

Apart from her career in singing and songwriting, Grant has also authored several books to date.

Additionally, she has released other two books namely: ‘Breath of Heaven (Mary’s Song)’, ‘And Mosaic: Pieces of My Life So Far.’

How did Amy Grant got injured?

On July 27, she was onto in a Bike ride accident. According to the reporters, she hit a pothole while riding her bicycle with her friends near Harpeth Hills Golf Course.

Grant has not revealed her current salary.

However, she has an estimated net worth of around $ 55 million at present.

Grant has become part of several controversies within the Christian community due to the complaints that she is ‘too worldly and too sexy.’

Additionally, she became part of a controversy after an article made her look as though she condoned premarital sex.

Amy later commented that the article misrepresented her views. At present, there are no rumors concerning Grant and her career.

Talking about her body measurement, Grant has a height of 5 feet 7 inches.

Furthermore, her hair color is brown and her eye color is dark brown.

There is nerve inflammation involved due to which the person afflicted by shingles gets severe pain and tingling sensation in the area. This is followed by painful rashes and blisters. Continue reading…

Additionally, she has over 127k followers on Instagram. Similarly, her Facebook page has more than 1.1 million followers.

Is Sandra Lee getting Married? More into the Ring shopping with Fiancé Ben Youcef