Indeed the Love for Nation!!!

Amy McGrath is married to Erik Henderson. He is a former naval Lieutenant Commander.

They exchanged vows on the 19th of December 2009. The couple planned their wedding to the Christmas theme wedding with red and gold colors.

Soon after that, the couple went to Afghanistan for their mission. At the time, they spent 9 months separated. The couple completed their family with two sons Theodore and Geroge and a daughter, Eleanor. 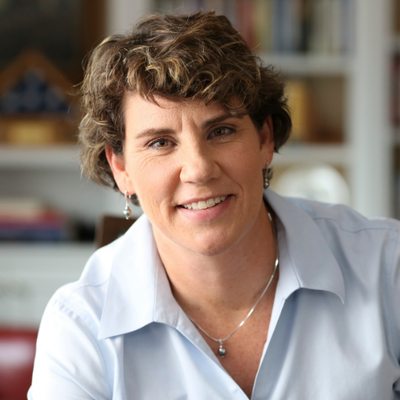 Senator McConnell has always won in the past because he's had a bigger blow horn. He's always had tens of millions of dollars more than his opponent

Who is Amy McGrath?

She became the first woman to fly for the marine cops in a compact mission.

On the 3rd of November 2020, she will be running as a candidate for the 2020 United States Senate election in Kentucky against, Mitch McConnell.

Her father, Donald McGrath was a High School teacher. Also, her mother, Marianne McGrath is a psychiatrist. Marianne happens to be the first woman to graduate from the University of Kentucky’s medical school.

In 1993, she graduated from the Notre Dame Academy in Kentucky. During her High School days, she used to be the captain of the soccer team.

Later, she joined the US Naval Academy in 1993 and graduated from the institute in 1997 with Honors in Political Science. After that, she also attended Georgetown University and received a certificate in legislative studies.

Following that, in 2014, she earned her master’s degree from Johns Hopkins University.

After that, she wrote her representative, Pat Schroeder who replied to her encouraging and saying that congress is working on the very issue at the time.

– At the age of 21, Amy McGrath started her career as the second in the Marine Corps.

– Later, in 1999, she started her career as a Weapons Systems Officer and F/A-18 Pilot. For the military, she flew over 50 combat missions in Afghanistan. Also, she flew over 35 combat attacks into Iraq for Iraqi Freedom. Also, she worked as the instructor for the Air Compact Tactics.

– In January 2011, she joined the Congressional fellowship for the US House of Representatives. At the time, she worked as the advisor for congresswoman Susan A. Davis in the matter regarding foreign affairs and defense issues.

– On the 1st of June 2017, she retired from the armed force as a lieutenant colonel.

– On the 1st of August 2017, she announced that she will be a candidate for the United States House of Representatives from Kentucky’s 6th congressional district. However, in 2018, she was defended by the republican Andy Barr with a vote of 47.8%

– On the 9th of June 2019, On Twitter, she announced that she will be running for the United States Senate for Kentucky. In the election, she will be challenging Mitch McConnell.

To date, she has not disclosed any details on her net worth. Her earnings as a fighter pilot were in the range of $36k to $148 including the bonus.

Also, her husband, Erik Henderson had earnings that ranged from $55k to $99k as naval Lieutenant Commander.

As of now, the former fighter pilot has not been through any sort of controversy that created a buzz in the media.

Amy McGrath is a brown-eyed brunette. There is no information about her height and her weight is 70 kg.

She also has a YouTube channel with around 5.78 subscribers and 2.8 million views.

You may also read the bio, age, education, salary, career, net worth, and controversy of Tom Cole, Adam Schiff, and Jim Bridenstine.