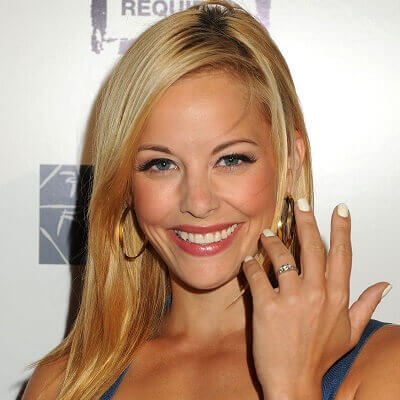 Amy Paffrath is a married woman. She is married to Drew Seeley. Her husband is a Canadian-born actor, singer, and dancer who has recorded a number of songs for the Walt Disney company.

The couple started dating in 2007. Around seven years after being in a relationship, the couple decided to get married. They exchanged wedding vows on April 28, 2013, in Fort Zachary Taylor State Park, Key West, Florida. The beautiful seaside wedding ceremony was attended by close friends and family.

They announced they were expecting a child in February 2019 and on July 20, 2019, she gave birth to their first child, a daughter named Ember Florence Seeley.

They recently celebrated their seventh anniversary with beautiful captions on their Instagram posts.

Who is Amy Paffrath?

Amy Paffrath is an American actress and TV show host. She is best known as the host of E! News, Dating Naked, etc.

Amy Paffrath was born Amy Christine Paffrath on July 22, 1983, in St. Louis, Missouri, USA. As of 2020, her age is 36. She was born to parents Mark Paffrath (father) and Mary Paffrath (mother). She was born as the middle child and has six siblings: Christy, Steven, Mark, Matt, Stacey, and Brittany.

Her mother enrolled her in tap, ballet, and jazz class when she was three. As a kid, she loved performing and would get excited to learn new steps. At the age of 9, she entered gymnastics and won several awards in different gymnastics competitions. While she was in elementary school, she started experimenting with theatre and started featuring in plays.

Her ancestry is German, American.

Talking about her education, she attended St. Thomas-Aquinas Mercy High School. After completing her high school studies, she joined the Missouri School of Journalism. In 2005, she earned her degree in Broadcast Journalism.

How much is Amy Paffrath worth?

Amy Paffrath has an estimated net worth of around $3 million. There is no information about her annual salary.

At a small station, hosts earn around $35 per year. In medium stations, anchors or hosts can earn up to  $47k per year whereas, at large stations, a host can earn around $135k a year on average.

After graduating with a degree in journalism, she moved to L.A. in 2005. It did not take much time for her to land on-air reporting jobs at ‘Direct TV for In the Mix’ and ‘Created by You’.

In 2007, she got the opportunity to host her own pop culture news show, Broadcaster News on Broadcaster.com. The daily news show aired for more than 300 episodes. Moreover, she also landed the role of host in the E! News Now.

Since then, her demand as a host kept growing. She became a series regular on MSN’sThe Big Debate’. Moreover, she got the role of guest host on Attack of the Show and The Daily Habit. She also hosted MTV’s popular show, Jersey Shore: After Hours and seasons four, five, and six of Jersey Shore: Reunion.

Amy is also a stand-up comedian and has performed in some famous clubs in L.A. A regular at Improv Olympics in Top Story! Weekly, she has also featured in famous sitcoms including Hot in Cleveland, Sullivan & Son, and 2 Broke Girls. Paffrath hosted the first two seasons of Vh1’s Dating Naked.

She also has movie credits in Moonlight on Ivy, Fly Kidz, Dinner at Eight, The Purge: Anarchy, and Huntsville.

Amy stands at a height of 5 feet 4 inches. She weighs around 51 kg. She has an attractive body figure with the measurements, 35-25-35 for breasts, waist, and hips. Her dress size is 4 and her bra size is 34A. Her hair color is blonde and she has a pair of blue eyes.

Paffrath has not been involved in any controversies in her career as an actress and TV host. She has been able to keep herself away from any kind of scandal and controversy. So far, she has not done anything controversial to harm her image and reputation. Similarly, there are no rumors about her, either.

You may also like to read the Bio, Career, Social Media, Body Measurements, Net Worth, Relationships, and more about Damon Wayans, Joseph Simmons, Drew Seeley, and more.