Amy Poehler is an actress, comedian, and director who was in Parks and Recreation (2009-2015). 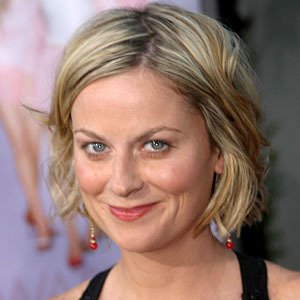 As you navigate through the rest of your life, be open to collaboration. Other people and other people's ideas are often better than your own. Find a group of people who challenge and inspire you, spend a lot of time with them, and it will change your life.

I've always dreamed of growing up to be Amy Poehler.

Amy Poehler is a divorced and single woman at the present time. She was previously married to the famous Canadian actor Will Arnett. The couple got married on 29 August 2003. They together had two children named Abel Arnett and Archie Arnett. The couple divorced in 2016. Since then, she has not been in any relationship till now. According to the records, she is possibly single at the present time.

Who is Amy Poehler?

Amy Poehler is an American actress, comedian, and director. In addition, she is also a producer and writer. She is best known for starring as Leslie Knope in the NBC sitcom Parks and Recreation (2009-2015). For her role in the sitcom, she won a Golden Globe Award for Best Actress in a Television Musical or Comedy Series in 2014.

Amy Poehler was born on 16 September 1971, in Burlington, Massachusetts, USA. Her nationality is American and she is of German, Irish, Portuguese Azorean, and English ethnicity.

Her birth name is Amy Meredith Poehler. She is the daughter of Eileen and William Poehler. Both of her parents are teachers. Her brother, Greg Poehler is also a producer and actor.

Amy began her career as a comedian with the group, Upright Citizens Brigade (UCB). The group performed sketch and improv around Chicago before moving to New York City in 1996. Amy became popular in 2001 when she joined the cast of Saturday Night Live.

She worked with Saturday Night Live from 2001 to 2008. She then began working as an actress and director. Amy played the role of Leslie Knope in the NBC sitcom Parks and Recreation. (2009-2015). For her role in the series, she won a Golden Globe Award for Best Actress in a Television Musical in 2014. In addition, she won a Critics’ Choice Award for Best Actress in a Comedy Series in 2012. Previously in 2005, she won a Teen Choice Awards- Choice Comedian for her work on Saturday Night Live. In 2011, TIME magazine listed her as “100 most influential people in the world”.

Amy became co-anchor of SNL’s Weekend Update in 2004 alongside friend and colleague Tina Fey. She is also known for voicing Joy in Inside Out and Sally O’Malley in the Horton Hears a Who!. In addition, she has voiced the character Bessie Higgenbottom in the 2008–2011 Nickelodeon series, The Mighty B! Moreover, Poehler served as an executive producer on the Swedish-American sitcom Welcome to Sweden, along with her brother Greg Poehler.

Since August 2015, she has served as an executive producer on the Hulu original series Difficult People. In 2016, she won the Primetime Emmy Award for Outstanding Guest Actress in a Comedy Series for Saturday Night Live. She has been nominated for Primetime Emmy Award 18 times in her career.

Amy Poehler: Salary and Net Worth

Amy has a net worth of 25 million dollars but her salary is not revealed yet.

Rumors were that Amy dated Nick Kroll, an actor in the early 2010s. Currently, there are no desperate rumors regarding her personal and professional life. It seems she is doing her best job without harming others and has been a straight person in her life. As a result, she has not been in any controversy yet.