Amy Robach is a television presenter, reporter in ABC's 20/20. Amy is married and a mother of two. 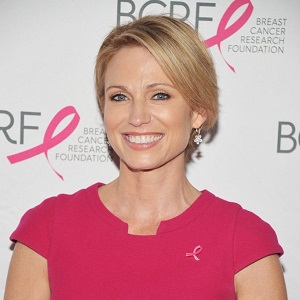 You don't have to live on a farm to have chickens

in some places, you just need a little bit of green space and a tidy chicken coop. To me, they're nearly ideal pets. They feed us more often than we feed them! We have 2 chickens, Goldie and Paprika, and they each produce 1 egg a day, sometimes more

I am going to cut my hair very short

I've never done this before... I want to say I had something to do with how I look, not the cancer

Amy Robach was married to Tim McIntosh from 1996 until filing for an uncontested divorce in 2008. They have two daughters, Ava and Analise.

Robach became engaged to former Melrose Place star Andrew Shue in September 2009, after meeting him at a book party the prior April.

They were married on Robach’s 37th birthday, February 6, 2010, at The Lighthouse at Chelsea Piers. Robach has three step-sons from her marriage to Andrew Shue, Nate, Aidan, and Wyatt.

Amy rotates with 20/20 anchor Elizabeth Vargas if Robin Roberts is unavailable. She was 4th runner-up in the Miss Georgia pageant in 1994.

Amy Robach was born Amy Joanne Robach on February 6, 1973, in East Lansing, Michigan. Her nationality is American and her ethnicity is Caucasian. There is no information about her parents.

She lived half of her childhood in St. Louis, Missouri, spent nine years in Georgia, and moved on to South Carolina, Washington, D.C., and the New York area. She was a competitive gymnast for seven years as a child.

Robach graduated from Brookwood High School in Snellville, Georgia, and from the University of Georgia with high honors in Broadcast Journalism.

Amy Robach previously worked at WTTG in Washington, D.C., and came to NBC News in 2003 where she spent four years, including a stint anchoring two hours in the morning. She was named co-anchor of Weekend Today in July 2007. Her last day on Weekend Today was May 19, 2012. She also filled in on Countdown with Keith Olbermann and Morning Joe.

On November 11, 2013, Robach revealed on Good Morning America that she had been diagnosed with breast cancer after receiving a mammogram on live television on October 1, 2013, and after undergoing follow-up tests off the air. She took time off from broadcasting to undergo a bilateral mastectomy.

On November 22, 2013, Robach revealed that during surgery doctors found a second malignant tumor in her other breast and that cancer had spread to her lymph nodes (Classified as Stage IIB). She then underwent eight rounds of chemotherapy, radiation, and reconstruction surgery.

There have not been many rumors and controversies regarding Amy. She has, thus, maintained her public image clean.

Amy Robach has a height of 5 feet 5 inches. Her body weighs 54kg. She has dyed blonde hair and blue eyes. Her body measurements are 34-25-34 inches.