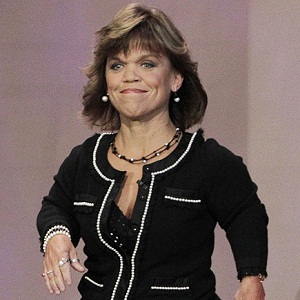 All the children are of normal height, except Zach. Although Zach and Jeremy are fraternal twins, Jeremy has a normal height. They all lived on the 36-acre Roloff Farms, located north of Hillsboro in Helvetia, Oregon (a suburb of Portland).

Who is Amy Roloff?

Roloff was born Amy Jo Knight on September 17, 1964, in Michigan, the United States America. Her nationality is American and ethnicity is North American.

She is the daughter of Gordon Knight(father) and Patricia Knight(mother). Her parents, and all other sisters, and brother are all of the average sizes. Her dwarfism is the result of achondroplasia, a genetic condition that results in disproportionately short arms and legs.

She is a graduate of Central Michigan University.

Although the exact onset of her career is unknown, she was seen on the TV for one of the first times in Little People, Big World in 2005. Little People, Big World is an American reality TV series that premiered on March 4, 2006, and aired on TLC. The series chronicled the lives of the Roloff family farm. Many of the episodes focused on the parents, Matt and Amy, and 1 of their sons, Zach, who have dwarfism.

On August 26, 2010, TLC announced that the sixth season would be the last for the show. After its final season, TLC aired several specials: “Conquering Mount St. Helens”, “Breaking Down the Walls”, and “Welcome to the Jungle”.

On October 5, 2012, TLC announced a spin-off series – Little People Big World: Wedding Farm. It chronicled Matt and Amy as they jump-start their wedding business on the farm. The series premiered on November 13, 2012, and ran for 6 episodes.

When not acting, coaching, parenting, or teaching, she is a philanthropist. Her Amy Roloff Charity Foundation makes use of her celebrity by benefiting the needs of kids, at-risk youths, and disability groups. Amy has also given back to the Dwarf Athletic Association of America, helped fund an organization for foster care parents and the kids they have adopted, and supported low-income senior housing and a homeless shelter focusing on keeping family units together.

Amy is also an active member of Little People of America. She also worked with Matt to help manage the LPA 50th anniversary national conference in Seattle, Washington, in 2007.

Amy Roloff: Salary and Net Worth

While her salary is unknown, she has a net worth of $4.5 million.

There were rumors about the divorce between Amy and Matt, which later turned out to be true. Also, Matt & Amy Roloff’s Youngest Son Jacob Claims He Was ‘F***ed’ Out Of Reality TV Fortune.

Amy Roloff has the height of 4 feet 2 inches. Her body weight is not known. She has brown hair and blue eyes.

Amy Roloff has moved out of Roloff Family Farm into a self-purchased house in the vicinity costing $588.5k!