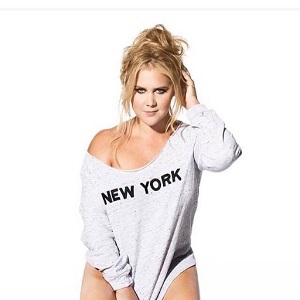 I tend to eat pretty healthy, though, and I work out - I work out hard

The last couple of roles I missed out on went to Jennifer Hudson, Jessica Biel and Olivia Wilde.

Amy Schumer is a married woman as of now. She has tied the knot on Feb 13, 2018, with a chef and farmer Chris Fischer. Their marriage ceremony took place in Malibu, California.

This couple was blessed with a baby boy on May 5, 2019. They named him Gene Attell Fischer.

She was in a relationship with Furniture designer, Ben Hanisch. She had confirmed the relationship in January 2016. The two used to also go on romantic trips including the one in Paris. However, In May 2017 the couple has split.

Who is Amy Schumer?

She is best known for TV series, “Inside Amy Schumer”. Furthermore, she became more popular among the audience after giving an outstanding performance in the film, “Trainwreck”.

Amy was born in the city of Manhattan in the state of New York on June 1, 1981, to parents, Sandra Jones, and Gordon Schumer. She holds an American nationality and Ashkenazi-Jewish ethnicity.

Her parents owned a baby furniture company. She grew up following Jewish faith.

She was raised in a wealthy family as her parent’s furniture business was very successful. Later in her childhood, she had a pretty tough time. Her family went bankrupt and her parents got divorced. Afterward, she moved to Long Island.

As per her education, she attended South Side High School in Rockville Centre, New York. She graduated from there in 1999.  Afterward, she joined the Hebrew school of the Central Synagogue of Nassau County.

Similarly, after that, she joined Towson University and in 2003, she graduated with a degree in theater.

Amy Schumer has a very successful career as of now. But in the beginning, she worked as a bartender and a waitress. Following her graduation in 2003, she acted in a theater play, “Keeping Abreast”. After a year in 2004, she started her comedy career starting as a stand-up comedian.

Afterward, she did stand-up in several shows like, “Live at Gotham”, “Reality Bites Back”, “Cupid”, and so on. Her most popular and successful stand-up show is “Inside Amy Schumer” which she is doing since 2013.

She made her acting debut in 2006 in a film, “Sense Memory”. Her most successful movie is “Trainwreck”, which is a 2015 American romantic comedy film. She is also the writer and the producer of the film.

Additionally, she has done films like, “Price Check”, “Seeking a Friend for the End of the World”, “Snatched”, and “Thank You for Your Services”.

Amy has won several awards like, “Primetime Emmy Award”, “Peabody Award”, and others for her outstanding performances.

As of now, the megastar Amy earns a huge salary per year. Although the information on her annual salary is not available, she has a huge net worth of $ 16 million.

Amy was involved in media controversy when she was arrested for shoplifting with her sister. It was said that she is set to marry her boyfriend Ben in 2017, but they have now split.

Amy Schumer has a height of 5 feet 7 inches. She weighs 70 kg and her other measurements are 38-28-39 inches. Her eyes are blue and her hair is blonde.